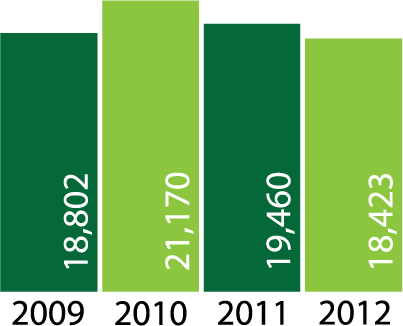 Today I am celebrating four years of Toyota Prius ownership. By no means would I classify myself as a car aficionado. I'm not drawn to muscle cars from the 1960s, and I'm not nostalgic about cars with fins. The Adam West Batmobile is cool, so is the DeLorean from Back to the Future.

My first car was a 1990 Chevy Cavalier Z-24. I'm sentimental about that car, but only because it was first mode of transportation that wasn't a bicycle. It represented freedom to a degree. In retrospect, it wasn't nearly as sporty as I thought back in high school. My second vehicle was a gas-hogging 1997 Ford Explorer. Sure, it was nice to have a larger vehicle. But honestly, how often do you help friends move?

Without hesitation, I would say my Prius is my favorite. I get great fuel efficiency. It holds more in the back than people realize. So, over the last four years, I tracked the mileage I put on that car. Based upon the numbers, apparently I drove fewer miles this last year. In 2010, I logged the most miles. I guess our trip to Minneapolis accounts for that increase.

If mine ever gets old enough to replace, I'd like to get one. A lot of people think they are ugly but I don't see that. I'd love to have a hybrid.

I would love to have a smaller car, but we use the space of my Pilot a LOT. Have two boys of school age makes for lots of opportunity for use.

Our Toyota Corolla is the same age as Bill's Prius and we get 30 mpg. with very low maintenance cost and we expecting it to last us at least another 6 to 8 years. Bill on facebook there is a place where you can buy parts for Toyotas and they work. I broke the mirror cowling and was told that I would have to buy a whole mirror assembly; however, after going to the website I worked thru the various questions and got the part I needed and called to make sure. Three to five days it was at my door and I put it on and you can tell it. If you need a colored part they have it by color.

We have a 2006 Prius with MANY miles on it. We started out getting 47/48 mph in the mountains -- 50 on flat land. It has diminished some but we're still getting 44.5, even further into the mountains -- up/down/up/down. Mileage is best in spring/fall, worse in summer, worst in winter (because of battery?). Have you noticed a difference in your mileage, re: weather?

It's not the most comfortable car I've driven (by far) but it is much roomier than expected.

I have noticed seasonal changes in mileage. Living in the Midwest, winter is obviously the worst. Spring is the best by far. Summer just depends upon how much the A/C needs to run.

'89 z-24 was my first car Bill. Then I went to a Jeep Cherokee and then 2 Infinity Qx4's. When that went, I inherited my wife's Highlander which I liked but was only averaging 16 to 18 mpg. I put about 2500 miles per month with my job and commute back and forth between Springfield and Chicago so I bought a Suburu Outback back in March of this year and I have to say it is my best car ever. I average about 29 mpg and it still has the room to move things when I need to. I bought a cargo carrier to go with it and believe me, you can fit a lot of extra luggage in that thing.

I love the gas mileage I am getting but still have the space I need. I wanted to get a pickup truck but I dont think a pickup is allowed on LSD.