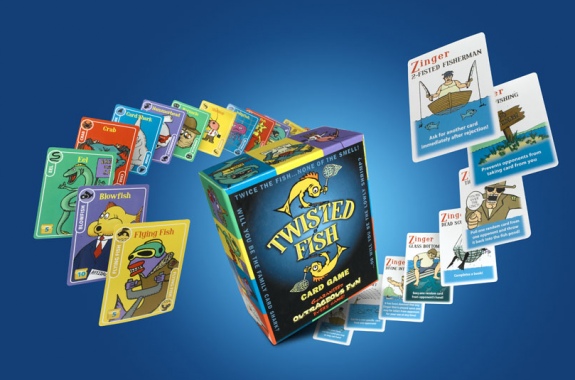 Our nephew, Riley, without a doubt is the greatest Twisted Fish player I've ever seen. Granted, I've only witnessed a handful of people play the card game live. Following Thanksgiving dinner this evening, he tacked on one more for the victory column. Last week, we even joked that he'll be 80 years old and socializing at the local senior center. He'll whip out the Twisted Fish box and all of his fellow seniors will be in awe. "We've never seen him lose. Ever."

So what is Twisted Fish? The game is a contemporary spin on Go Fish! It's in essence the same game, just with a host of unusual aquatic characters. It features a Flying Fish, a Blowfish and a Card Shark to name just a few. Find all of colors for each character (yellow, blue, green, purple and red) and you earn a match. The player with the most matches wins.

Photo source: Have the Best Christmas Ever

We have a game called Go Ape that we love. It's like Go Fish, but you have monkeys and you have to act out what the monkey is doing on the card. Great fun!

I'll look that game up.