Something must be askew. This afternoon, the Chicago Cubs celebrated the opening of the 28th Annual Cubs Convention and here I am writing a blog about the Chicago White Sox.

Today, the White Sox announced that they will continue the tradition of donning retro uniforms for home games on Sundays. Last season, they turned the clocks back 40 years to the Dick Allen era by wearing the red and white pinstripes from 1972. Those team that wore those uniforms were wildly successful.

Plenty of fans refer to this uniform from the mid-1980s as their "softball" uniform. Personally, it was always my favorite south side uniform.

Here's a shot of Harold Baines batting and wearing that uniform. 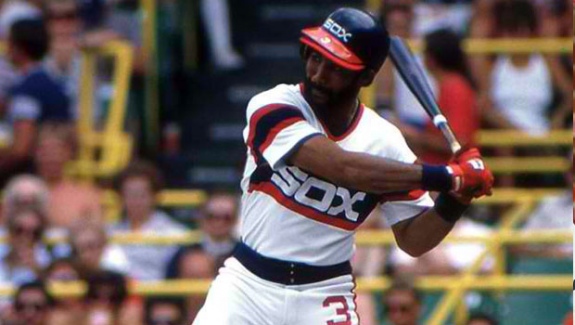 The White Sox really haven't made a lot of progress since "Veeck As In Wreck".

Other than their World Series victory in 2005?