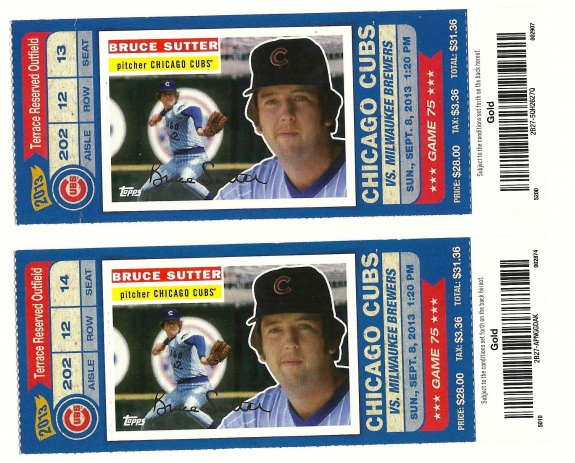 It's early September and I'm making my first and only trek to Wrigley Field this season. That statement is highly irregular, but it's true. In fact, this is only my sixth MLB game of the season. This afternoon Susan and I get to see our two teams, the Milwaukee Brewers and Chicago Cubs, battle one last time in 2013. Perhaps "battle" may be a liberal use of the term. Neither team is doing well, and realistically, both teams could be eliminated from postseason contention this afternoon. The outcomes of the Pirates / Cardinals and Dodgers / Reds games could mathematically seal their fate.

The Brewers (61-80, .433) are in fourth place in the National League Central and trail the front-running St. Louis Cardinals by 20.5 games. They are clinging to life in both the division and wild card races. Their elimination numbers are one for the division and two for the wild card. They will send Yovani Gallardo (10-9, 4.31 ERA) to the mound.

The Cubs (60-81, .426) are in last place in the NL Central and sit 21.5 games out of first. With the loss yesterday, they were eliminated from the division race and their elimination number for the wild card is one. Scott Baker (0-0, 0.00 ERA) will make his 2013 debut this afternoon. Baker underwent Tommy John surgery in April 2012 and has spent this season rehabbing and pitching in the minor leagues.