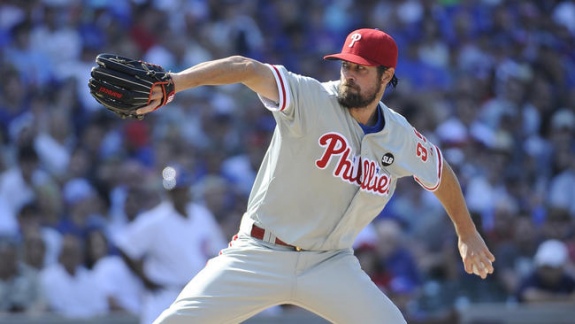 Whenever I step inside the 101-year-old ballpark on Chicago's north side, or when I simply switch on the television and watch a Cubs game from the comfort of my own living room, I never expect to witness history. Games are just games. Teams win, teams lose. But history did take place at Wrigley Field yesterday.

For nearly 50 years the Chicago Cubs have strung together a remarkably long streak. No, it's not the franchise's World Series title drought. That streak extends much longer, more than double actually. Since September 9, 1965, the Cubs have managed to hit safely in 7,920 consecutive games. Considering how many woeful teams the Cubs have fielded since that day, and how many brilliant pitchers have toed the rubber against them, it's almost unfathomable that the Cubs have managed to muster at least one hit per game during that stretch.

With the non-waiver trade deadline looming at the end of July, Cole Hamels (5-7, 3.91 ERA) took the mound against the Cubs. Saturday was his first start at Wrigley Field since he earned a no-decision on July 17, 2010. Since the Phillies are buried at the bottom of the National League East, most experts seem certain Hamels will be moved prior to Friday's deadline. One of the rumored suitors for Hamel's services is the Cubs. A proposed deal that circulated on social media last week had the Cubs offering Starlin Castro and Javier Baez in exchange for Hamels. While that move seems unlikely, Hamels suited up for potentially his last time donning Phillies red.

Hamels needed 129 pitches to end the Cubs no no-hitter streak, the longest active streak in Major League Baseball. Only two Cubs reached base. Dexter Fowler walked twice, and Anthony Rizzo reached first on a fielder's choice. The Phillies won 5-0 thanks to a three-run home run by Ryan Howard. Will Hamels be traded this week to a contender for the stretch run? Only time will tell.

The last time the Cubs were held hitless was against Sandy Koufax and the Los Angeles Dodgers at Dodger Stadium. In fact, Koufax pitched a complete game that evening. Oddly enough, the Cubs' starting pitcher, Bob Hendley, only surrendered one hit in eight innings. Lou Johnson doubled in the bottom of the seventh inning. But the lone run crossed the plate when Johnson walked in bottom of the fifth and eventually scored.

This was also the last time a no-hitter was thrown at Wrigley Field since Cubs starter Milt Pappas no-hit the San Diego Padres on September 2, 1972 en route to an 8-0 win.