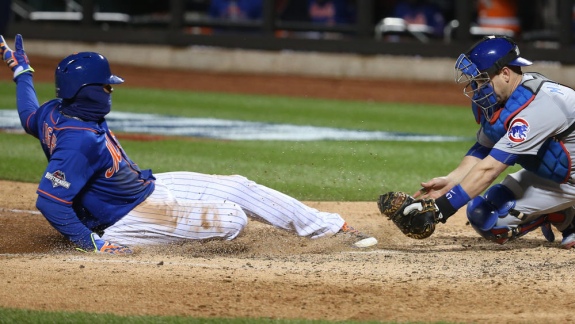 All four franchises have reached the World Series, and as a matter of fact, each team has won the hallowed title. Yes, even the Chicago Cubs. But that was a long time ago. The Cubs, Mets and Blue Jays have each won two titles, while the Royals have only one. Regardless which two teams ultimately emerge victorious and claim their respective pennants, it'll be a Fall Classic original.

When the New York Yankees and Pittsburgh Pirates bowed out early during the two wild card games, that eliminated a rematch of the classic 1960 World Series featuring Bill Mazeroski's series-winning blast at Pittsburgh's Forbes Field. 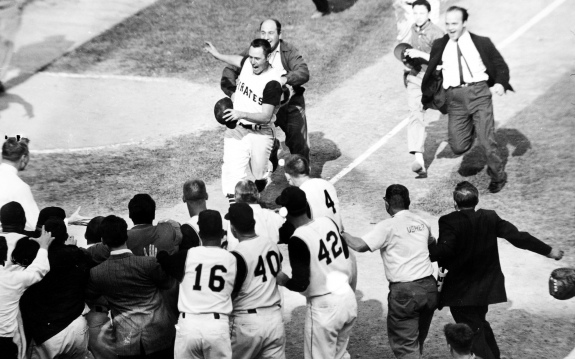 In the bottom of the ninth of Game 7, Bill Mazeroski belts the first World Series-winning home run in baseball history off of Ralph Terry.

Having the Yankees bounced so soon removed most of the possible rematches. All of the classic Yankees/Dodgers tales that could have been spun have been shelved. Those tales dominated the 1950s back when the Bronx Bombers and "Dem Bums" played less than a dozen miles from each other. Fans won't hear about Babe Ruth and his so-called "Called Shot" against Charlie Root and the Cubs at Wrigley Field in 1932. No battles with the St. Louis Cardinals, or even the crosstown Mets.

Babe Ruth stands at the plate on October 1, 1932 on the verge of hitting the most famous home run in Wrigley Field's history.

Since departing our nation's capital and ditching the Senators moniker, the Texas Rangers have only reached the World Series twice and dropped them both. While a Rangers/Cardinals World Series may only be of recent vintage, it would provide a compelling story. On two separate occasions during the 2011 World Series, the Rangers were one strike away from achieving baseball greatness. Both times the Cardinals rallied and ultimately won the title.

One of last year's potential outcomes never materialized, and the Cubs prevented it again this postseason. When the Cubs sent the Cardinals packing, that eliminated a 30th anniversary rematch of 1985's I-70 World Series between the Royals and Cardinals. To date, that remains the Royals' lone World Series title. If the Royals can advance, the 1985 Series is sure to enter the discussion. Every Royals fan who created a "Party Like It's 1985" sign last season could very well drag them out again next week.

So only four options remain: