One of my earliest memories from grade school dates back to kindergarten. Sitting cross-legged on the floor, I could hardly wait to have Ms. Carson call my name. That particular day was show and tell and it was my turn to bring something from home. When our teacher asked for me to step forward, I sprung to my feet and stood before my classmates.

"And what did you bring today, Billy?" she asked.

Let's take a moment to set the scene. Star Wars has existed for just shy of four decades, and during that span, I cannot fathom how many times I have watched the original film. I'm not even mentioning the sequels, prequels and its so-called Expanded Universe. There have been comic books, comic strips, novelizations, made-for-TV films, animated series and more. When I was in kindergarten, nobody suspected that Darth Vader was Luke Skywalker's father. Nobody assumed that Luke Skywalker and Princess Leia were siblings separated at birth.

On that day back in kindergarten, the original film hadn't been rebranded with its official name, Star Wars Episode IV: A New Hope, yet. It was just Star Wars. I had only seen the film once, but I was ecstatic to show everyone two action figures: Darth Vader and Obi-Wan "Ben" Kenobi. 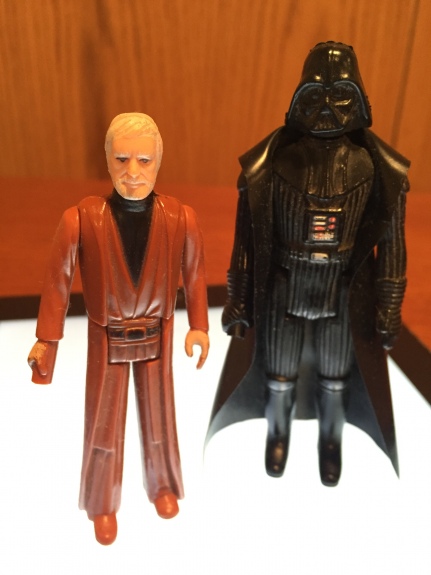 I was far too young to comprehend the mythology behind the story, and I certainly couldn't quote complete scenes, but I was obsessed. I remember showing my classmates how my Darth Vader and Ben Kenobi action figures could fight with their lightsabers. Complete with my interpretation of lightsaber sound effects and Vader's mechanical breathing. I am also fairly certain that I kept referring to them as "the bad guy" and "the good guy" during my demonstration.

After all of those years, I still have the two action figures I brought to class that day in 1978. Yes, the two figures pictured above were the same two. As time marched along, both Vader and Kenobi lost their original telescoping lightsabers that would extend from their right arms. And Kenobi's original brown vinyl cape has long since vanished. But the passion I had for the original Star Wars has only grown stronger. So have the bins of movie memorabilia in my basement. The first sequel, The Empire Strikes Back, is without a doubt my favorite film of all time. The prequels were lacking, but this coming Thursday, another film, Star Wars Episode VII: The Force Awakens will be released in theaters.

I can guarantee that I'll be as excited as I was all of those years ago.