Smalley to Terwilliger to the Right Field Stands 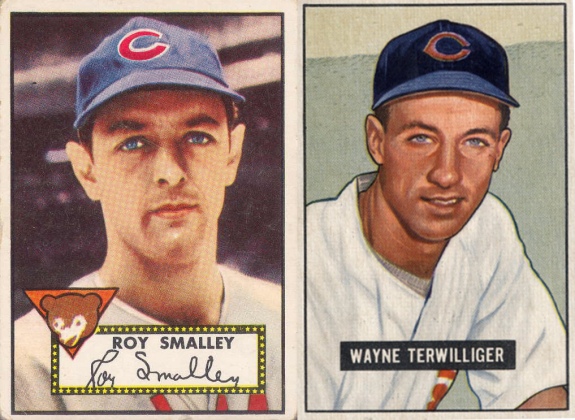 Spring training is back. All 30 major league teams have migrated to their preseason facilities in the warmer climes of Arizona and Florida. It's a sign that beautiful weather is just beyond the horizon. While the focus of each franchise's training camp is evaluating young talent and gazing at the future, it's easy for fans to soak in nostalgia. I'm guilty as charged.

The Cactus and Grapefruit leagues take me back to my earliest days playing baseball. Back to days when each new season meant that my parents had a spending spree looming in the future to buy new spikes and perhaps a bigger glove. But this year, my mind wandered back to high school (two years in the '80s and two years in the '90s). Not to my days playing on the high school team, but rather, to Mr. Patterson's Creative Writing class on the second floor overlooking the football field.

Mr. Patterson, lovingly referred to as Rockin' Tommy, taught English, literature and writing courses. He was a mild-mannered, well-educated man who looked like he stepped right out of the 1950s. His look was classic: white dress shirt, black pants and black shoes. Not quite Leave it to Beaver, but slightly disheveled.

To call Mr. Patterson quirky was probably an understatement. Standing more than six-feet tall, he had a bizarre habit of stretching his legs almost Zen-like while lecturing about the difference between irony and coincidence. Imagine Mr. Miyagi standing atop the seaside bollards perfecting the crane kick before an audience of kids wearing Guess jeans and Swatch watches. He tossed around strange words like "onomatopoeia" with regularity. He told tales about being disciplined by Chicago's Catholic nuns. Not the kind who beat you mercilessly with rulers, rather the kind who punished you by scrapping your knuckles against brick walls. God bless 'em.

So why did I think about Tom Patterson?

During my senior year, my classmates were tasked with writing a short story dealing with different generations. Naturally, I thought about Wrigley Field. Sure it was cliche but it was a cliche I knew well. Even for a teenager. Where else could multiple generations sit and watch a baseball game?

My story focused upon two young men, possibly in their early 20s, sitting in the stands watching Shawon Dunston, Ryne Sandberg and Mark Grace turn a routine 6-4-3 double play against the rival St. Louis Cardinals. Two middle-aged men sitting next to them start a debate with the younger lads. They claimed that Don Kessinger, Glenn Beckert and Ernie Banks were a better double play combination. In a classic case of deus ex machina, Mr. Cub himself was sitting directly behind the four gentlemen. (Seriously, how would Ernie Banks sit in the grandstand and not get recognized? He belted 512 home runs for the Cubs between 1953 and 1971. He won back-to-back National League MVPs in 1958 and 1959.) Banks slaps the men on their shoulders and tells them it doesn't matter. While laughing, Banks said something like, "Hey! They're all Cubs and they're all great."

Mr. Patterson returned my paper with an almost perfect score. At the top of the page he wrote, "Thanks for the trip down memory lane. In my day it was Roy Smalley to Wayne Terwilliger to the right field stands."

I must confess that I just laughed it off at the time. But today, I had to dig through the archives. In 1950, Roy Smalley was charged with 51 errors at shortstop. As a second baseman that season, Wayne Terwilliger added 24 more.


Tags:  baseball, Chicago, Cubs, Dwight, high school, Wrigley Field
3 Comments
One of my favorite memories is walking up to Wayne Terwilliger in Fort Worth and asking him if he was doing well while the grounds crew worked vainly on the field after multiple days of rain. They had hoped to play two, but ultimately couldn't even get started. While they worked, I listened to "Coach Twig" talk for almost an hour about Ted Williams, Winfield... it was a real thrill!

Fantastic story, Jef. Thanks for sharing.

Osmanthus fragrans tea is a kind of precious flower tea made from exquisite tea billet and fresh
https://www.vipsiteweb.com