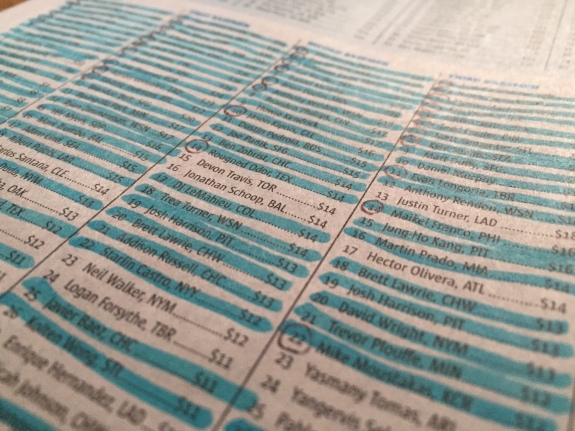 This morning, my fantasy baseball league gathered for our annual draft. Our usual host had a conflict with the date, so we needed an alternate location. I've always joked that our auction-style draft is simply a bunch of college friends and co-workers sitting in a living room reciting players' names and counting by one. Believe me, if you've been a part of a fantasy auction draft, you know what I am talking about. It goes something like this:

If you are not familiar with fantasy baseball, participants draft real players and use their actual statistics to build teams and compete against each other. This year our league has 10 teams. Our league is a mixed 5x5 league. That means we use players from both the National and American leagues and we use five offensive categories and five pitching categories (Runs, Home Runs, Runs Batted In, Stolen Bases, Batting Average, Wins, Saves, Strikeouts, Earned Run Average and Walks / Hits Per Innings Pitched). We draft two catchers (C), one first baseman (1B), one second baseman (2B), one shortstop (SS), one third baseman (3B), one corner (1B/3B), one middle (2B/SS), five outfielders (OF), one utility player (UTIL), nine pitchers (P), and seven bench players (B#).

I say this every year, so please allow me to repeat myself. I'm not sure what to make of my team, so ask me in October.