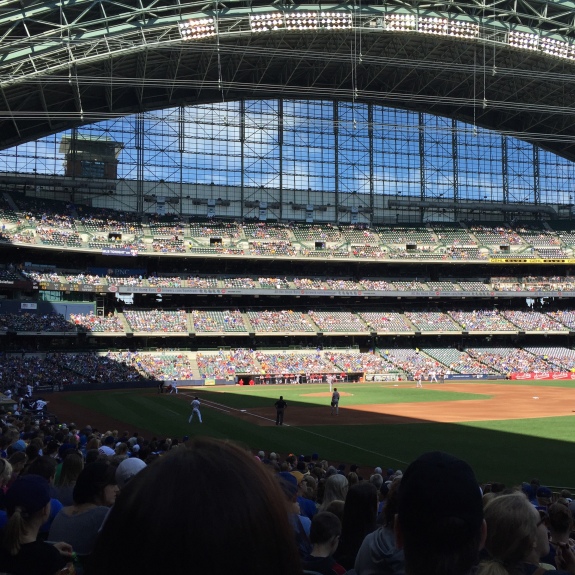 Today, we make our first trip to Milwaukee's Miller Park in 2016. When I stepped outside to grab the newspaper, I was glad we're seeing a game under a retractable roof this evening. It's just a little damp and chilly.

This evening the Milwaukee Brewers (15-21, .417) will host the San Diego Padres (16-21, .432). The Brewers are currently in fourth place in the National League Central, 12 games behind the front-running Chicago Cubs. The Padres are buried at the bottom on the National League West, but sit only three-and-half games behind the Los Angeles Dodgers and San Francisco Giants.

Last night, the Brewers beat the Padres, 1-0. In their last 10 games, the Brewers have posted a 4-6 record. During that same span, the Padres have finished 5-5. This is the first series between these two teams in 2016. After two games of a four-game set, the series is tied 1-1.

The San Diego Padres will send Luis Perdomo (1-0, 9.88 ERA) to the mound. Perdomo, a rookie in 2016, has appeared in 10 games this season. All 10 appearances have come in relief. Tonight, he will make his first start. As a member of the Peoria Chiefs (St. Louis Cardinals Midwest League affiliate) in 2015, Perdomo was the starting pitcher for Midwest League West All-Stars. He pitched one inning, surrendered one earned run and suffered the loss. The Brewers will counter with 27-year-old Wily Peralta (2-4, 6.75 ERA). Peralta debuted with the Brewers in 2012, but had his best season in 2014 when he compiled a 17-11 record and a 3.53 ERA.

Fun Fact: The last time I saw the Padres in action was on April 18, 2015. The Padres lost to the Chicago Cubs, 7-6, at Wrigley Field in 11 innings. The eventual 2015 National League Rookie of the Year, Kris Bryant, recorded his first career hit that day.