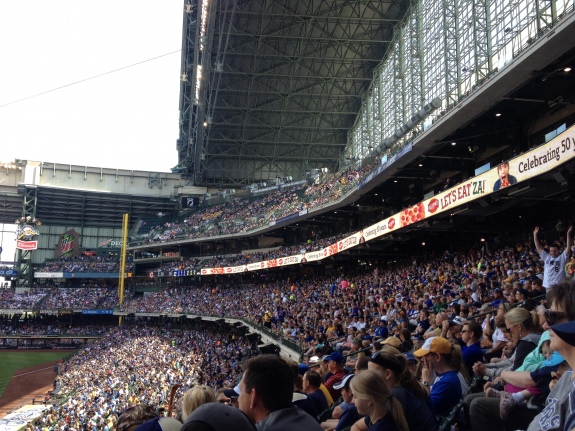 When Max Scherzer stepped on the mound for the series opener against the Milwaukee Brewers on Friday night, the Washington Nationals were poised to halt a five-game losing streak. But then the game was played. Despite striking out 10 Brewers, Scherzer surrendered five hits and allowed five earned runs en route to a 5-3 loss. On Saturday afternoon, the losing streak continued as the Brewers held on to beat the Nationals, 6-5. Though they remain atop the National League's Eastern Division, the Nationals' losing streak has reached seven games, and on Sunday afternoon, they hope to avoid being swept for the second consecutive series.

One of the best pitchers in baseball was scheduled to start for the Nationals on Sunday afternoon. The 27-year-old Stephen Strasburg (10-0, 2.90 ERA) was slated to return to the mound after missing his last start against the Los Angeles Dodgers. But during warmups prior to Saturday's game, his upper back issues flared up. I'm disappointed to miss one of the game's most dominant pitchers, especially since I've posted blogs about him in the past (about injuries, about a World Series run, and missed opportunities). At least today's giveaway is a Greg Vaughn bobblehead. 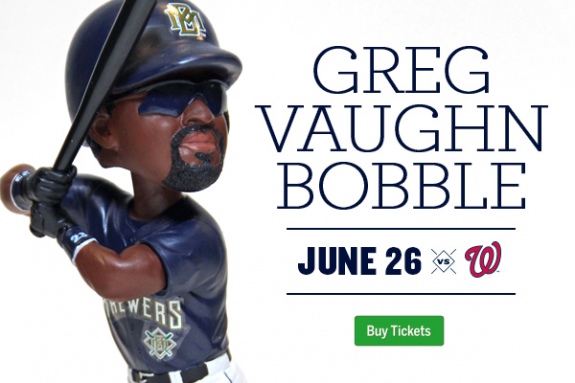 Taking Strasburg's place, the Nationals will start the 29-year-old Tanner Roark (6-5, 3.18 ERA). Roark picked up wins during his last two starts against the Phillies and Padres. During that stretch, he allowed four earned runs in 13 innings. The Nationals (43-32, .573) maintain a two-game lead over the New York Mets in the NL East. Only the Chicago Cubs and San Francisco Giants have more wins (48) in the Senior Circuit.

The 27-year-old Jimmy Nelson (5-6, 3.80 ERA) will attempt to complete the sweep this afternoon. He has not pitched deep into games during his last three starts, 5 1/3 innings or fewer, and picked up losses during his last two. The Brewers (34-40, .459) sit in fourth place in the NL Central and trail the front-running Cubs by 14.5 games.