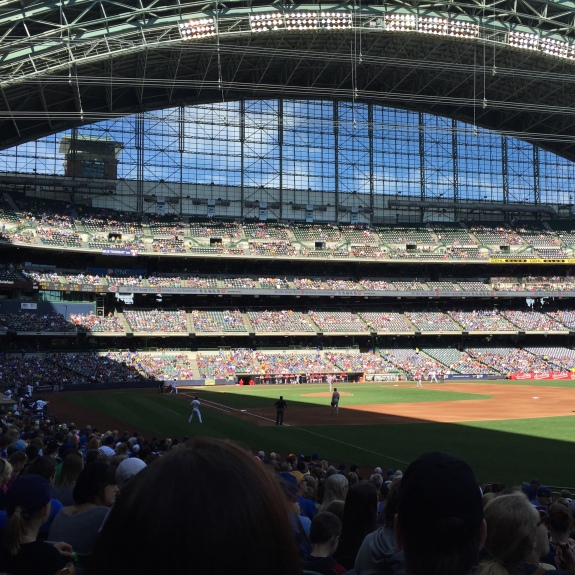 This afternoon, we'll be traveling to Miller Park to see the Milwaukee Brewers (70-85, .452) play their final home game of 2016 against the Cincinnati Reds (64-90, .416). Today's game has absolutely no playoff implications as neither team is in the running for a National League wild card spot. It's simply a way to embrace the regular season for nine additional innings in late September.

It's also one more attempt at seeing the Brewers win a game this season. After four trips to Miller Park in 2016, the Brewers finished 0-4. None of the games ended in a blowout. In fact, every single game was competitive. Despite trailing the San Diego Padres 6-2 after six and a half inning on May 14, the Brewers forced extras only to lose 8-7 in 12 innings. On June 26, the Washington Nationals and Brewers were scoreless after six innings. In the bottom of the ninth, Martin Maldonado homered with two outs, but the Brewers fell 3-2. The Brewers held a 4-1 lead over the first-place Chicago Cubs on July 24. In the top of the fifth, the Cubs erupted for five runs to grab a lead they would not relinquish. Kirk Nieuwenhuis homered in the bottom of the ninth, but once again, it was not enough. Finally, on August 27, the Brewers jumped on the Pittsburgh Pirates with four runs in the bottom of the first. They took a 5-1 lead into the fourth, but the Pirates plated five runs in the top of the fourth and three more in the sixth. This time, the Brewers failed to rally in the ninth and dropped the game, 9-6.

Today, the Reds will send 23-year-old Brandon Finnegan (9-11, 4.10 ERA) to the mound for, more than likely, his penultimate start of 2016. Finnegan has pitched well during his last seven starts. During that stretch, he has compiled a 2-3 record and an earned run average of 2.87. The Reds compiled a 2-8 record over their last 10 games.

The Brewers will answer with Wily Peralta (7-10, 5.21 ERA). Peralta, the 27-year-old righty, has posted a 3-2 record and 3.30 earned run average over his last seven starts. One of those wins was against the NL Central champion Cubs. Peralta missed some time this season due to injury. As a result, he is only appearing in his 22nd game. The Brewers are 6-4 in their last 10 games.