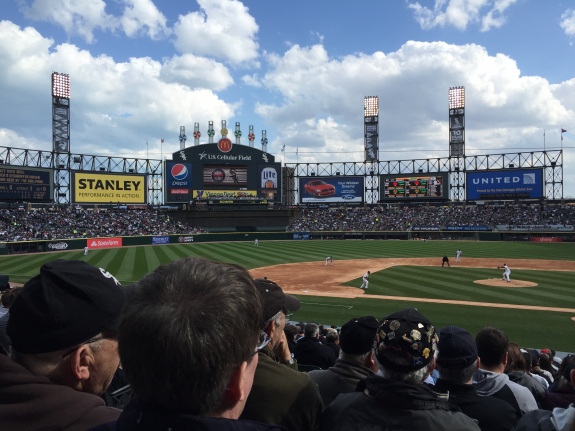 Today is the final day of the regular season, so I cannot think of a better reason to sneak in one more game before the playoffs start. Of course, neither of the teams I am seeing this afternoon are fighting for a World Series title this year.

This afternoon, the Minnesota Twins (58-103, .360) are buried in last place in the American League Central Division. They trail the division-winning Cleveland Indians by 35.5 games. Jose Berrios (2-7, 8.61 ERA) will make the start for the Twins. The 22-year-old righty made 13 starts during his debut season. During his last seven starts, he has failed to earn a win, but was tagged with five losses. In his most recent start, he lasted 4.2 innings against the Kansas City Royals and surrendered three earned runs.

The Chicago White Sox (78-83, .484) endured a difficult season. On May 9, the White Sox sat atop the American League Central with a 23-10 record and a comfortable six-game lead over the eventual division-winning Indians. On the final day of the regular season, they sit in fourth place and trail the Indians by 15.5 games. Chris Sale (17-9, 3.21 ERA) will make his final start of the season and potentially the last of his career in a White Sox uniform. If the White Sox intend to rebuild the organization, Sale is one of their few bargaining chips.

Today's game is more than likely Robin Ventura's final game as manager of the White Sox. The White Sox have scheduled a press conference for Monday, and news leaked on Saturday that Rick Renteria will be named as manager for the 2017 season.

On a final note, today's game will be the final time the White Sox will call their home U.S. Cellular Field. Beginning next season, the ballpark at 35th and Shields will be rebranded as Guaranteed Rate Field.

Fun Fact: The last time I saw the Minnesota Twins play was during the White Sox home opener on April 10, 2015. The Twins beat the White Sox, 6-0, that afternoon. That was the first Paul Molitor's first managerial win of his career.