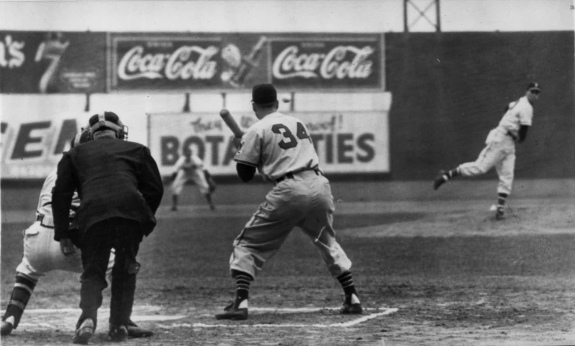 With a 2-1 win over the Toronto Blue Jays on Saturday, the Cleveland Indians remain undefeated during the 2016 postseason and are now two wins away from claiming the franchise's first American League pennant since 1997. As with the four teams vying for a World Series title during this postseason, an Indians championship will bring a 68-year drought to an end. For a franchise with five American League pennants, the Indians have only won two World Series titles. The first came in 1920 with a World Series win over the Brooklyn Robins (five games to two in a best-of-nine format). The second, and most recent, came in 1948 against the Boston Braves.

As the 1948 regular season concluded, the Indians and Boston Red Sox were tied atop the eight-team American League with 96-58 records and needed a one-game playoff to determine which team would face the Braves in the World Series. The Braves (91-62) won the National League pennant by six-and-half games over the St. Louis Cardinals. On Monday, October 4, the two teams traveled to Boston's Fenway Park to play the deciding game. With four runs in the top of the fourth inning, the Indians grabbed a 5-1 lead and would claim the AL pennant with an 8-3 win.

Following a rest day on Tuesday, the Fall Classic commenced on Wednesday, October 6 at Braves Field. The Indians and Braves would play the first two games at Braves Field then travel to Cleveland Stadium for Games 3 and 4, then Game 5 if needed. If needed, the series would conclude in Boston.

During the series opener, Boston's Johnny Sain (24-15, 2.60 ERA) and Cleveland's Bob Feller (19-15, 3.56 ERA) treated the 40,000-plus fans in attendance to a masterful pitching matchup. Sain fanned six batters and allowed four hits and no runs. Feller limited the Braves to two hits all afternoon, but the damage was done in the bottom of the eighth inning. With Phil Masi standing on second (pinch-running for Bill Salkeld who started the inning with a walk), Tommy Holmes singled to left field and drove in the game's lone run.

Despite dropping the opener, the Cleveland Indians grabbed control of the World Series during the third, fourth and fifth games. Bob Lemon (20-14, 2.82 ERA) followed Feller's complete game with one of his own in Game 2. The Indians knocked Warren Spahn (15-12, 3.71 ERA) out of the game in the top of the fifth inning. Spahn allowed two runs in the fourth and another in the fifth. Cleveland added an insurance run in the top of the ninth to tie to series with a 4-1 victory.

During Game 5, the Braves stopped the bleeding by pouncing on Bob Feller. Bob Elliot tagged Feller with two home runs. He belted a three-run blast in the top of the first inning and then added a solo shot in the third. The Indians rallied and scored four in the bottom of the fourth to claim a brief 5-4 lead. The Braves tied the game with a Bill Salkeld home run in the sixth, then the floodgates opened in the seventh when Boston plated six runs to secure an 11-5 win.

With Cleveland holding a three-games-to-two lead, the World Series shifted back to Boston. When Lou Boudreau doubled in the top of the third, he drove home Dale Mitchell to give the Indians an early 1-0 lead. Mike McCormick evened the score with a single in the bottom of the fourth inning that drove Elliot home. Cleveland regained the lead in the top of the sixth when Joe Gordon leadoff the inning with a home run. Then with one out, Jim Hegan grounded out and Thurman Tucker scored. For good measure, Eddie Robinson added an insurance run in the eighth inning. The Braves rallied for two runs in the bottom of the eighth, but it was not enough. Gene Bearden closed out the game to secure Cleveland's second World Series championship.

The Cleveland Indians would return to the World Series in 1954 and dropped all four games to the New York Giants. They faced the Braves (now located in Atlanta) once again in 1995 but lost in six games. Two years later, they battled the Florida Marlins but lost in seven games.