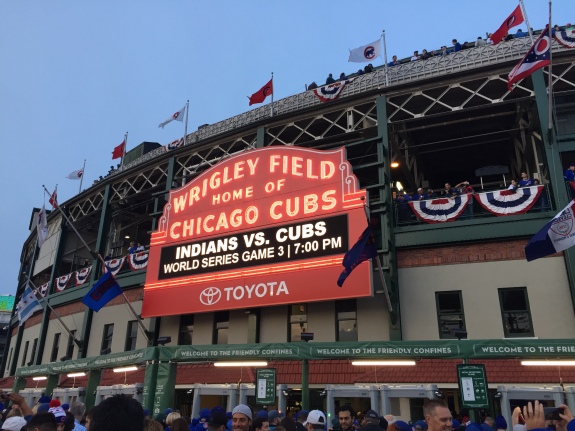 Wrigley Field was primed for a Chicago Cubs victory. After splitting the first two games of the 2016 World Series in Cleveland, the games shifted to the 102-year-old ballpark on Chicago's north side. For the first time in 71 years, Wrigley Field hosted World Series baseball. The atmosphere was thick with nostalgia, and the wind was blowing straight out at 14 miles per hour.

The Cubs' formidable offense won 103 games during the regular season, ranking second in the majors for on-base percentage (.343), and third with runs scored (808), runs batted in (767), and OPS (.772). The Cubs eliminated the San Francisco Giants and the Los Angeles Dodgers in the National League Division Series (NLDS) and National League Championship Series (NLCS) respectively to win the franchise's first pennant since 1945. But during their march to a pennant, the high-octane offense vanished in each series. During the NLCS, the Dodgers neutralized the Cubs' offense for 21 consecutive scoreless innings. Despite offensive woes early in the NLCS, the Cubs scored 23 cumulative runs during the final three games to win the franchise's 17th pennant and advance to face the Cleveland Indians in the World Series.

After a thunderous conclusion to the NLCS, the Cubs bats disappeared in the World Series opener in Cleveland. The Cubs lost, 6-0. In Game 2, the bats re-emerged and the Cubs knotted the series at one. In essence, the World Series became a best-of-five set with three of the remaining games at Wrigley Field. With a howling wind, the Game 3 stage was set for a high-scoring affair reminiscent of a late-1970s Cubs-Phillies spectacle. Kyle Hendricks, the Cubs starting pitcher had to keep the ball on the ground. Kris Bryant and Anthony Rizzo just needed to hit the ball deep and the wind would handle the rest.

Three hours and 33 minutes later, the Indians won 1-0. According to Jeff Sullivan from FanGraphs, Game 3 was the second-longest nine-inning 1-0 game in baseball history. Only Game 1 of the 2013 American League Championship Series (ALCS) between the Detroit Tigers and Boston Red Sox was longer (3:56). The Cubs offense only managed five hits and one walk.

The Indians compiled eight hits, walked three times and Hendricks hit Jason Kipnis with a pitch in the top of the fifth. Cleveland hitters reached base in six of the nine innings. The lone run of the game came in the top of the seventh when Coco Crisp, pinch-hitting for reliever Andrew Miller, singled to drive home pinch-runner Michael Martinez.

Despite not getting many runners on base, the Cubs missed multiple opportunities to seize control of the game. Ben Zobrist began the bottom of the second inning with a leadoff single. For baseball romantics, Zobrist was the first Cubs batter to log a World Series hit at Wrigley Field since Roy Hughes singled off of Hal Newhouser in the bottom of the ninth of Game 7 in 1945. When Willson Contreras grounded out, Zobrist advanced to second base. He failed to score. Bryant had a leadoff walk in the fourth inning, then Rizzo fouled out and Zobrist grounded into a double play. Jorge Soler singled to start the fifth inning, reached second on Javier Baez groundout, and then failed to score.

After the Indians grabbed a 1-0 lead in the top of the seventh, the Zobrist and Contreras grounded out in the bottom of the frame. With two outs, Soler hit a long fly ball to right field. The right fielder, Lonnie Chisenhall, misplayed the ball and Soler wound up with a triple. Jason Heyward entered the game as a pinch runner for Soler and then Baez grounded out to the shortstop.

Kyle Schwarber, whose missed almost the entirety of the 2016 regular season and returned as the designated hitter at Progressive Field, pinch hit for Pedro Strop in the bottom of the eighth inning and struck out. With two outs, Dexter Fowler singled to left field then Bryant struck out. Aroldis Chapman pitched a 1-2-3 top of the ninth.

Still trailing 1-0, Anthony Rizzo singled to left to start the ninth inning. Chris Coghlan entered the game as pinch-runner. Zobrist fanned then Contreras grounded out, but Coghlan advanced to second. Heyward reached first on an error by first baseman Mike Napoli and Coghlan reached third. With Baez at the plate, Heyward swiped second. The Cubs only needed a Baez single in the bottom of the ninth to win the game and take a 2-1 series lead, but he struck out.

The Cubs offense never took advantage of the heavy wind and failed to deliver to a crucial hit with runners in scoring position. Now the Cleveland Indians hold a 2-1 series lead with their ace, Corey Kluber, pitching Game 4.