Above: New York Giants vs. Chicago Cubs at West Side Grounds on August 30, 1908.

For decades, just referencing 1908 was enough to agitate Chicago Cubs fans. Everything changed last November when the Cubs defeated the Cleveland Indians to win the franchise's first World Series title since...well, 1908. Enduring a 108-year title drought was harrowing for generations of Cubs fans, but winning the franchise's third World Series title could not have happened during a more appropriate season.

In 2016, the Cubs celebrated their 100th anniversary of playing baseball at Wrigley Field. After the short-lived Federal League folded following the 1915 season, the Cubs moved to Weeghman Park (now known as Wrigley Field). Constructed in 1914, Weeghman Park served as the home for the Chicago Whales (or Chi-Feds). Prior to 2016, the Cubs reached the World Series six times while playing at Wrigley Field (but only five of them were played at the Friendly Confines), and lost them all. So where did they win the franchise's two titles?

For 22 seasons (1893-1915), the Cubs called the West Side Grounds home. The infamous poem, Baseball's Sad Lexicon, coined the phrase "Tinkers to Evers to Chance." Joe Tinker, Johnny Evers and France Chance played as Cubs at the West Side Grounds and not at Wrigley Field (Tinker played seven games with the Cubs during 1916 prior to retiring as a player). During those 22 seasons, the Cubs won four National League pennants (1906, 1907, 1908 and 1910). Sorry, the legendary "Merkle's Boner" did not take place here. That happened at the Polo Grounds in New York.

In 1906, they won 116 games en route to a pennant and established a major league record for a 154-game season. During the 1906 World Series, the Cubs met the Chicago White Sox for the only all-Chicago Fall Classic. Despite winning 116 games, the Cubs lost the World Series in six games.

After the Cubs abandoned the West Side Grounds and moved to Chicago's north side, the State of Illinois purchased the property in 1919 for $400,000 to construct what is today's Illinois Medical District. The 16,000-seat wood and steel ballpark was demolished in 1920. Nothing of the former ballpark remains on the site, but curious baseball fans will find a commemorative plaque located near 912 South Wood Street. This plaque can be found near where the flagpole once stood in center field. 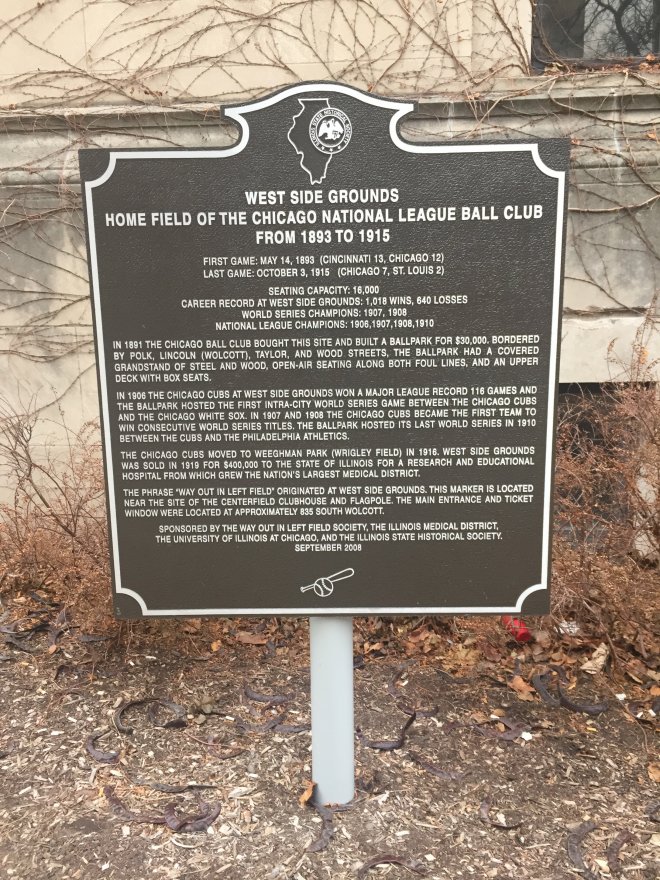 As the 2017 Major League Baseball season approaches, Cubs fans will prepare for a season as defending World Series champions. But fans can also make a brief trek to the west side to reminisce about the team's first World Series title 110 years earlier.