A Banner Evening at the Friendly Confines 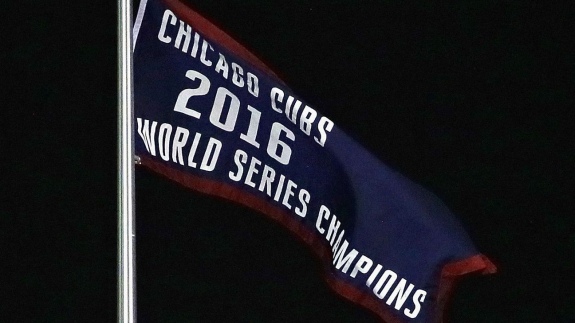 Last night, the Chicago Cubs and 41,000-plus long-suffering fans persevered through a two-hour rain delay to soak up a historic event as the franchise showcased the ever-evolving Wrigley Field and unveiled four banners above the outfield bleachers. During its more than one century of existence, Wrigley Field has not played host to such significant festivities.

After all, a rain delay seemed fitting to reminisce about the 2016 World Series. No Jason Heyward motivational speech was required last night.

After four decades of always watching the Cubs collapse, sometimes in grand fashion, I'm not certain I ever expected to see a World Series banner fly above the ballpark at Clark and Addison. Did I imagine it happening? Absolutely. But sure enough, it happened. Last night, the ceremony brought back a flood of euphoric memories (and a few filled with trepidation) from that evening in early November 2016.

Following the pregame ceremony, the Cubs battled their 2016 National League Championship Series (NLCS) foes, the Los Angeles Dodgers. The last time these two teams met was during Game 6 of the NLCS when Kyle Hendricks bested Clayton Kershaw to win the Cubs first National League pennant since 1945. The stakes were not nearly as high last night, but after squandering a 2-0 lead after five innings, the Cubs demonstrated the same resolve as the 2016 team and battled in the bottom of the ninth when Anthony Rizzo singled home Jon Jay to win 3-2.

It's foolish to claim that Cubs history prior to 2016 does not matter, but last night, the team added the finishing touches on a successful franchise rebrand. The days of having a loveable loser label firmly affixed to its fandom are rendered obsolete.