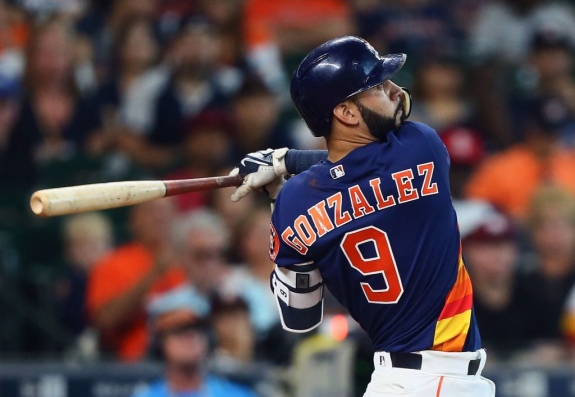 Outfielder Marwin Gonzalez belts a two-run homer during the fifth inning in Houston's division-clinching game against the Seattle Mariners.

With only two weeks remaining in the regular season, the 2017 MLB postseason picture is starting to take shape. With most of Sunday's action in the books, half of the division champions have been crowned, and one additional team secured a playoff berth.

Last week, the Washington Nationals began dousing themselves with celebratory champagne long before any other teams by clinching the National League East. This title is their second consecutive NL East championship and their fourth since relocating from Montreal (2012, 2014, 2016, 2017). To date, the Nationals have only won one postseason series (the 1981 National League Division Series as the Montreal Expos).

The Cleveland Indians resumed their winning ways last night by defeating the Kansas City Royals, 8-4. That win coupled with a Minnesota Twins loss to the Toronto Blue Jays gave Cleveland its second consecutive AL Central division title. After establishing a new American League record 22-game winning streak, the Indians have their sights locked upon a World Series title that has eluded the city since 1948.

Sometimes dramatic storylines can work in a team's favor. Leading up to the trading deadline, the Houston Astros made a bold statement and acquired Justin Verlander from the Detroit Tigers. After making his first two starts for the Astros on the road, Verlander made his home debut in the potential division-clinching game, and he did not disappoint. Verlander logged the win while allowing one earned run over seven innings as the Astros defeated the Seattle Mariners, 7-1. The Astros clinched their first postseason berth since moving to the American League, and their first division title since 2001.

Despite having the most regular season wins (96) and highest winning percentage (.649), the Los Angeles Dodgers have secured a playoff berth, but have yet to win the NL West. The Dodgers' magic number sits at 4 with the Arizona Diamondbacks remaining as the only team with a mathematical shot at winning the division.

In the American League wild card race, the Yankees hold a four-game lead over the Twins for the first spot. The Los Angeles Angels of Anaheim sit two games behind the Twins.

In the National League wild card race, the Diamondbacks hold a 4.5-game lead over the Colorado Rockies for the top spot. The Brewers and Cardinals trail by three and five games respectively.