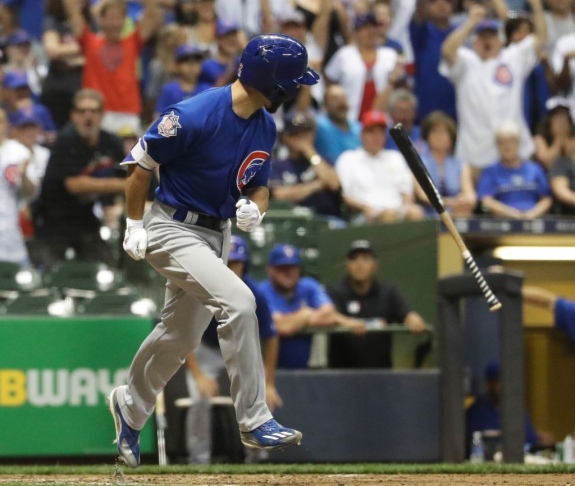 Tommy La Stella drives home the go-ahead run with a bases-loaded walk in the top of the 10th inning on Friday night.

When the 2017 Major League Baseball season began, it seemed a forgone conclusion that the Chicago Cubs would demolish their foes en route to the franchise's second consecutive National League Central Division title. In 2016, the Cubs thumped their opponents to the tune of 103 wins while exorcising 108-year-old demons and winning the World Series. That World Series run ended the longest championship drought in American sports history. Somehow in 2017, the St. Louis Cardinals would factor into the race, or possibly the Pittsburgh Pirates? The Cincinnati Reds would not pose a threat, and the Milwaukee Brewers were in the early stages of rebuilding the organization. But it's late September and the fate of the division is coming down to three teams: Brewers, Cardinals and Cubs.

Originally scheduled as a 6:10 p.m. start, today's game was rescheduled for 12:05 p.m. to appear as a national broadcast. Entering action this afternoon, the Cubs hold a five-game lead over the Cardinals and a five-and-a-half-game lead over the Brewers. The Cardinals and Brewers trail the Colorado Rockies for the second NL wild card spot by one-and-a-half and two games respectively.

Fun Fact: Today marks the 60th anniversary of the Milwaukee Braves clinching the 1957 National League pennant at County Stadium. With the score tied 2-2, the St. Louis Cardinals and Milwaukee Braves battled into the bottom of the 11th inning. With Johnny Logan on first base and two outs, Henry Aaron belted the pennant-winning home run to give the city of Milwaukee its first National League pennant. The Braves would eventually need all seven games to defeat the New York Yankees in the 1957 World Series.