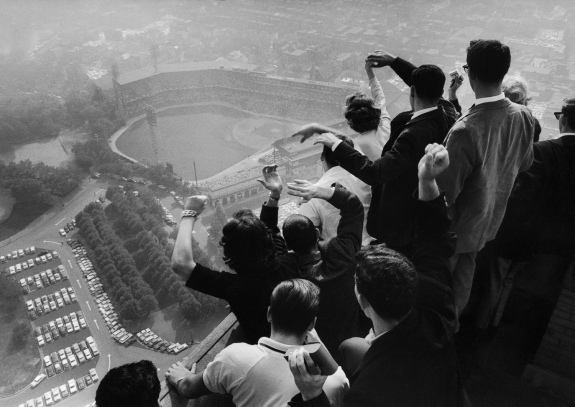 University of Pittsburgh students cheer wildly from atop the Cathedral of Learning as they look down on Forbes Field during Game Seven of the 1960 World Series.

So the Major League Baseball postseason begins tonight, and you have no idea about WAR, OPS or exit velocity. You've committed to watching games over the next month, but you're not sure which team to root for. I understand (not really, but I'll act like I do for the sake of this blog). Not everyone watching the playoffs grew up with a favorite team or player (I did. The Chicago Cubs and Ryne Sandberg). Not everyone grew up near a city with a team. I'm pleased to provide several reasons why you could potentially demonstrate allegiance for any of the 10 teams fighting for October glory.

For transparency, I'm a Cubs fan. I'm rooting for my lifelong team to repeat as World Series champions for the first time since Lyndon Baines Johnson and William Hartnell were babies. Seriously, the last time the Cubs won back-to-back titles was in 1907 and 1908. But here are several objective reasons to support any of the franchises.

Chicago Cubs (NL Central Champions, 92-70) - In years past, this was a given with long-suffering fans and a classic underdog story. But last season, the Cubs finally won the World Series after 108 years. The narrative has changed, but still, this franchise has only won three World Series titles (1907, 1908 and 2016). If you're looking for solid young talent, this may be the team for you (Kris Bryant, Javy Baez and Addison Russell). And away from the field, Wrigley Field is the second oldest ballpark in the game (constructed in 1914).

Los Angeles Dodgers (NL West Champions, 104-58) - When you think about classic World Series, you think of the Dodgers. To clarify, you're thinking about the Brooklyn Dodgers who almost always lost to the New York Yankees. Earlier this season, it appeared that MLB would simply cancel the postseason and anoint the Dodgers world champions. Fans debated if the Dodgers would shatter the all-time, single-season wins record (116), but ultimately they fell upon hard times and had a double-digit losing streak. The Dodgers haven't won or appeared in a World Series since 1988. And believe it or not, Dodger Stadium (constructed in 1962) is the third oldest park in baseball.

Washington Nationals (NL East Champions, 97-65) - If you're Canadian, this may be your team. This is as close as we'll ever get to see the Montreal Expos contend for a World Series. The Nationals have a phenomenal starting rotation with Max Scherzer and Stephen Strasburg. And Bryce Harper, the Nationals' right fielder, is one of the best hitters in the game.

Arizona Diamondbacks (NL Wild Card #1, 93-69) - This season, the Diamondbacks lived in the shadow of the Dodgers. Of all of the teams in the 2017 postseason, the Diamondbacks are the youngest franchise, but they have reached the postseason six times. They began play in 1998 and managed to win their lone World Series just three season later in 2001. Keep an eye on starting pitcher Zack Greinke and first baseman Paul Goldschmidt. Also, the team wears a crazy number of uniform combinations.

Colorado Rockies (NL Wild Card #2, 87-75) - The Rockies needed 160 games to clinch the final spot in the 2017 postseason. After falling behind by six runs, the St. Louis Cardinals rallied to win 7-6 and eliminate the Milwaukee Brewers from the NL wild card race. They dodged a bullet because the Brewers ended up winning their final game. The Rockies dropped their last two. Had the Brewers won on Saturday, the two teams would have played a tiebreaker game on Monday night. The Rockies won the first NL wild card in 1995, but lost to the Atlanta Braves during the NLDS. Ten years ago, the Rockies won the franchise's lone pennant, but lost the World Series to the Boston Red Sox. The last time the Rockies reached the postseason they lost to the Philadelphia Phillies in the 2009 NLDS.

Cleveland Indians (AL Central Champions, 102-60) - Since the Cubs ended their multi-generational World Series drought in 2016, the owner of the longest championship drought shifted to Cleveland (who lost to the Cubs in 2016). Though not nearly as long as the Cubs' drought, Cleveland has not won a World Series since 1948. That's four decades shorter than the Cubs feat. The Indians strung together 22 consecutive wins from late August to mid-September. If the Dodgers get eliminated before winning the National League pennant, World Series home-field advantage could go to the Indians.

Houston Astros (AL West Champions, 101-61) - If the Astros reach the World Series, they'll be the only franchise to win pennants in both the National and American leagues. The Milwaukee Brewers are the only team that could earn that title. In 2005, the Astros won the National League pennant and were swept by the Chicago White Sox. If you want to root for the little guy, this your team. Houston's second baseman, Jose Altuve, is five-foot-six-inches tall. This season he had an 8.4 WAR (sorry, I said I wouldn't mention that), he hit .346, had a .957 OPS, belted a career-high 24 homers and stole 32 bases.

Boston Red Sox (AL East Champions, 93-69) - Much like the Cubs, the Red Sox used to have a loveable loser quality to them. But with World Series titles in 2004, 2007 and 2013, the franchise has acquired more of an evil empire quality usually applied to the New York Yankees. Boston's Fenway Park is the oldest park in baseball (constructed in 1912), and the Green Monster is one of the coolest, most retro things in baseball. The Carmines (a longtime franchise nickname) are stocked with great players: Chris Sale, David Price, Xander Bogaerts, Dustin Pedroia (if he isn't hurt) and Mookie Betts.

New York Yankees (AL Wild Card #1, 91-71) - If you're rooting for the Yankees, you're rooting for baseball history. The Yankees conjure up images of the games icons: Babe Ruth, Lou Gehrig, Joe DiMaggio, Mickey Mantle, and list goes on. This team has won 27 World Series titles. They've lost more World Series than the St. Louis Cardinals have won. If nothing else, keep your eyes on right fielder Aaron Judge. He's only played in 182 career games and has hit 56 home runs.

Minnesota Twins (AL Wild Card #2, 85-77) - While Minnesota baseball only dates back to 1961, the Twins franchise has roots back to the earliest days of the American League. The Twins were the original Washington Senators. The Twins have appeared in three World Series and won two of them (1987 and 1991). Target Field is a beautiful park. Keep an eye on Miguel Sano.