And Then There Were Nine

Last night's American League Wild Card Game demonstrates why teams want to win their division and not play in a one-game wild card playoff. Teams would rather begin their postseason run in a short best-of-five League Division Series than play an all-or-nothing game to earn a place in their respective LDS.

The Minnesota Twins, the second AL wild card team, grabbed an early lead against the New York Yankees when Brian Dozier belted a leadoff home run of starter Luis Severino, then Eddie Rosario added a two-run blast. Severino exited the game after 1/3 innings pitched with three runs on four hits. During the top of the first inning, the Twins held what seemed like a commanding 3-0 lead, but in true Bronx Bombers fashion, the Yankees answered with three of their own in the bottom of the first.

The Yankees plated runs in the first four innings, then one more in the seventh for good measure. What broke the game open were three home runs. Didi Gregorius hit a three-run shot in the first. Brett Gardner had a solo homer in the second. Aaron Judge added a two-run blast in the fourth.

Neither team intended to burn through as many pitchers as they did (Twins 6, Yankees 5), but the Yankees secured a 8-4 win and a trip to face the Cleveland Indians in the American League Division Series (ALDS) beginning on Thursday.

But back to the AL Wild Card Game. Who will ever forget David Robertson's reaction to catcher Gary Sanchez's...umm...discomfort? 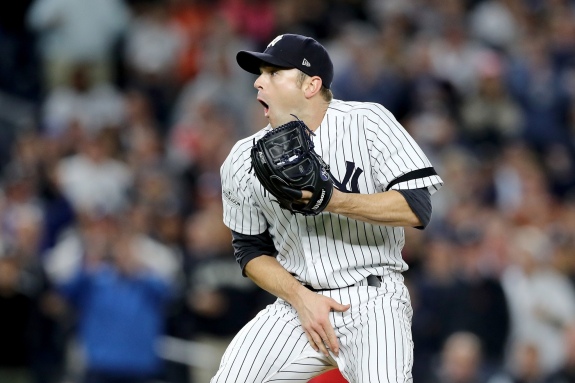