The Minnesota Vikings (13-3) were on the verge of history. With a win over the Philadelphia Eagles (13-3) during the NFC Championship Game, the Vikings would have gained a distinct advantage as the first team since the dawn of the Super Bowl era to play competitively during the sports' biggest game in their franchise's home stadium.

Despite grabbing an early 7-0 lead, the Vikings allowed the Eagles to score 38 unanswered points to win the NFC title. Regardless, either the New England Patriots or Philadelphia Eagles will win the Vince Lombardi Trophy at Minneapolis' two-year-old U.S. Bank Stadium this evening. Until the Super Bowl pre-game festivities gain full steam, let's make a brief jump to baseball. Let's examine the three times the Twin Cities hosted the World Series.

The Minnesota Twins franchise spans the entirety of the American League's history, but from 1901 through 1960, they played ball in our nation's capital as the Washington Senators. The Senators won three AL pennants (1924, 1925, 1933), but only once claimed baseball's grandest prize with a World Series victory over John McGraw's New York Giants. In 1961, the American League expanded in multiple ways. That season, every AL team's schedule increased from 154 to 162 games (the National League would adopt a 162-game schedule the following season). The AL also added two new teams. With the success of the Dodgers in sunny California, the American League installed a new franchise, the Los Angeles Angels, on the West Coast. The original Washington Senators relocated to Minnesota and changed their name to the Twins. A second incarnation of the Senators began play in the District of Columbia during 1961 (and in 1972, they would become the Texas Rangers).

When the newly minted Twins commenced play in 1961, the foundation of a great team was already in place. Sluggers Harmon Killebrew and Bob Allison had played portions of several seasons with the Senators. Hitters like Tony Oliva and Zoilo Versalles, and pitchers like James Timothy "Mudcat" Grant and Jim Kaat, quickly followed.

1965 World Series: Los Angeles Dodgers defeat Minnesota Twins (4-3)
In only their fifth season in Minnesota, the Twins finished seven games ahead of the Chicago White Sox to win the American League pennant. During the Fall Classic, the Twins would battle the National League's pennant-winning Los Angeles Dodgers. Since departing Brooklyn, the Dodgers won two World Series titles (1959, 1963) and were in search of the franchise's third title in eight years. 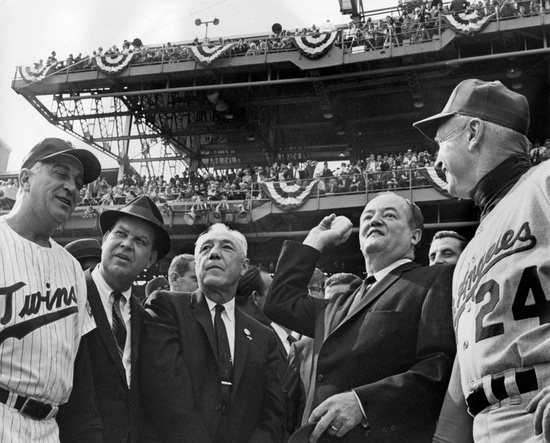 Metropolitan Stadium in Bloomington, Minnesota hosted the two initial games of the Series. Two of the premier pitchers in baseball, Don Drysdale and Sandy Koufax, toed the rubber during those games for the Dodgers. During Game One, the Twins pounced on Drysdale. In just 2 2/3 innings, the Twins scored seven runs on seven hits and a walk. Starting pitcher, Mudcat Grant, went the distance to grab an early Series lead. The next day, during Game Two, the Twins could only push across two runs (only one earned) in six innings against Koufax. But that was all they needed. Jim Kaat, like Grant in Game One, pitched a complete game. As the Series shifted to Dodger Stadium, the Twins held a comfortable 2-0 lead in the best-of-seven series.

Walter Alston, the manager of the Dodgers, knew his team would need to return to Minnesota if they intended to win a third World Series for the Angelenos. The Dodgers answered the call with offense and stellar pitching. The Dodgers swept the three games at home scoring four, seven and seven runs respectively. Claude Osteen, Drysdale and Koufax all pitched complete games while restricting the Twins to two runs at Dodger Stadium.

Back in Minnesota, the Twins forced a seventh and deciding game when they defeated the Dodgers, 5-1, during Game Six. Left fielder Bob Allison and starting pitcher Grant both homered and collectively drove in all five runs. But Koufax was masterful in Game Seven limiting the Twins to a mere three hits and no runs. Los Angeles' Lou Johnson and Wes Parker drove in all of the runs needed. Including their World Series title in Brooklyn, the Dodgers had won four titles in 11 seasons.

1987 World Series: Minnesota Twins defeat St. Louis Cardinals (4-3)
More than two decades after winning the Twin Cities' first AL pennant, the Twins returned to the Fall Classic to face the National League's St. Louis Cardinals. No longer calling Metropolitan Stadium home, the Twins played their games under a gigantic white roof inside the Hubert H. Humphrey Metrodome. In many ways this Series mirrored the 1965 World Series against the Dodgers. The Twins throttled the Cardinals in the first two games at home Game One, 10-1; Game Two, 8-4 before heading to Busch Stadium for the next three games. During the opening game, leadoff hitter Dan Gladden was 2-for-4 and drove in five runs. Catcher Tim Laudner caused damage in Game Two by going 2-for-3 with a home run and three runs batted in. 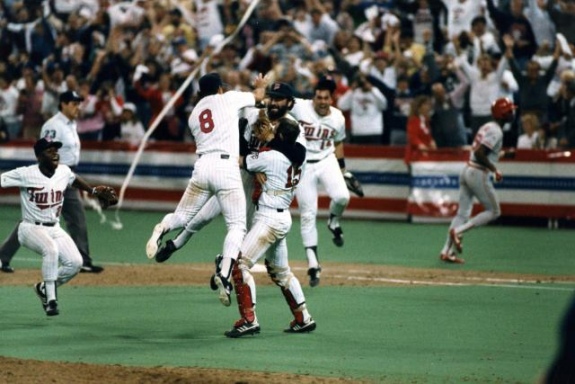 Whitey Herzog, skipper of the Cardinals, knew that his team needed to return to Minnesota in order to win the team's second World Series title of the decade (they defeated the Milwaukee Brewers in 1982). Just as the Dodgers did 22 seasons ago, the Cardinals rallied to sweep the three games in St. Louis taking a 3-2 Series lead.

Under the dome again, the Twins plated double-digit runs for the second time in the Series by beating the Cardinals, 11-5, in Game Six. Center fielder Kirby Puckett was 4-for-4 and scored four times. Designated hitter, Don Baylor, was 2-for-3 with a home run and three RBIs. First baseman Kent Hrbek had only one hit, but it was a sixth-inning grand slam.

Minnesota finally won a World Series title when starting pitcher, Frank Viola, scattered six hits over eight innings limiting the Cardinals to two runs. The franchise won its first title since they played in the District of Columbia in 1924. 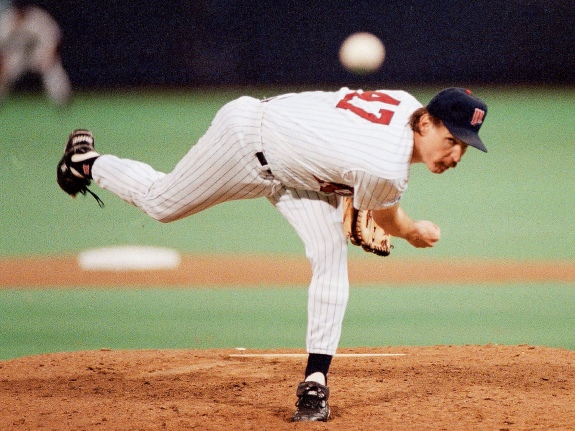 Just as they did in their two prior World Series, the Twins claimed victories in Games One and Two at home. The Braves needed 12 innings for Mark Lemke to single off of Rick Aguilera and drive home David Justice to win Game Three at Atlanta's Fulton County Stadium. Jerry Willard's ninth-inning sacrifice fly that scored Lemke from third base evened the Series at 2-2.

During Game Five, the Braves unloaded by scoring 14 runs, all between the fourth and eighth innings. Braves right fielder, David Justice, was 2-for-5 with a home run and five RBIs. Starting pitcher, Tom Glavine, lasted 5 1/3 innings to record his first World Series win.

Minnesota's manager, Tom Kelly, knew the Series was do-or-die when it returned to the Metrodome. Despite grabbing a 2-0 lead in the bottom of the first inning, the Braves answered with two in the top of the fifth. Each team would plate another run apiece, but in the bottom of the 11th inning, Kirby Puckett belted a solo home run off of Charlie Leibrandt to force a seventh-and-deciding game.

Starting pitchers Jack Morris and John Smoltz matched each other with zeroes for seven innings. With the score tied, 0-0, Bobby Cox pulled Smoltz in favor of reliever Mike Stanton. Kelly opted to leave Morris in the game. For 10 innings, Morris allowed no runs on seven hits and two walks. Dan Gladden began the bottom of the 10th inning with a double, then Chuck Knoblauch sacrificed him over to third base. Reliever Alejandro Pena intentionally walked Kirby Puckett and Kent Hrbek. Pinch-hitter, Gene Larkin, singled to deep left-center field to score Gladden and win the World Series.

Photos by: Also Out of My Mind!, MinnPost, and Sports Illustrated