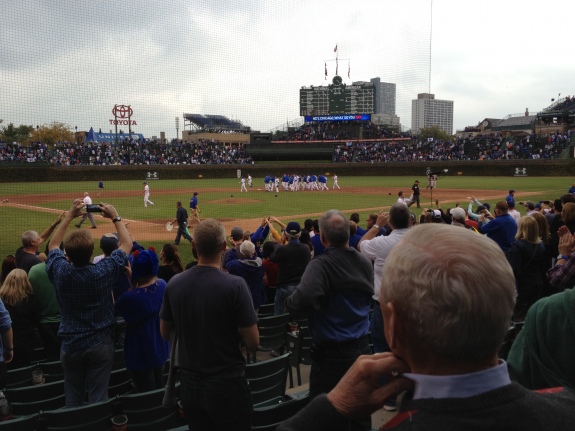 On October 3, 2012, the Houston Astros played their final game as members of the National League. The Chicago Cubs defeated the Astros, 5-4.

When Bryan LaHair cracked a game-winning single to right field off of Hector Ambriz, the Chicago Cubs handed the Houston Astros their 107th and final loss of the season. That hit also ended the Astros' tenure in the National League. That game on October 3, 2012, was also the last time I saw the Astros play live.

Much has changed since that game. The Astros were the first franchise since the Milwaukee Brewers to switch leagues. The Brewers departed the American League Central following the 1997 campaign to join the National League Central. Founded in 1962 as the Houston Colt .45's, the team adopted a new moniker in 1965. Since 2013, the Astros have competed as members of the American League West. They are the first team to reach the World Series as pennant winners from both the National (2005) and American (2017) leagues. In the 2005 Fall Classic, the Chicago White Sox swept the Astros. In 2017, the Astros needed all seven games to defeat the Los Angeles Dodgers en route to the franchise's first championship.

This afternoon, the White Sox (4-13, .235) play host to the Astros (15-7, .682) at Chicago's Guaranteed Rate Field. Houston will look to complete the three-game sweep. Thanks to stellar pitching from Justin Verlander (six innings pitched, two hits) and a high-octane offense, the Astros demolished the White Sox, 10-0. More significantly, White Sox pitcher Danny Farquhar suffered a brain hemorrhage during the sixth inning. On Saturday, the Astros nearly matched their previous effort against the South Siders with a 10-1 victory.

Reynaldo Lopez will pitch for the White Sox this afternoon. In three starts during 2018, he has allowed only three runs. (Photo: MLB)

Today, the Astros will send Lance McCullers, Jr. (2-1, 5.57 ERA) to the mound. During the 2017 World Series against the Dodgers, McCullers appeared in two games (1-0, 3.52 ERA). The White Sox will answer with Reynaldo Lopez (0-2, 1.42 ERA). Lopez, by far the South Siders' best starting pitcher as of today, has made three starts (Toronto, Detroit and Oakland). During those starts, he has logged 19 innings pitched and allowed only three runs. In the process, he's fanned 21 batters.

Fun Fact #1: Living in Chicago's western suburbs, I have easy access to attend games at two Major League Baseball parks: Wrigley Field and Guaranteed Rate Field. Even Milwaukee is a short 90-minute drive north. That means all 30 franchises roll through the area each season. I manage to see each team play every few seasons, but some teams just slip through the cracks. Until this afternoon, the Houston Astros were one of those teams (more than 2,000 days). Here's the list prior to today's game. 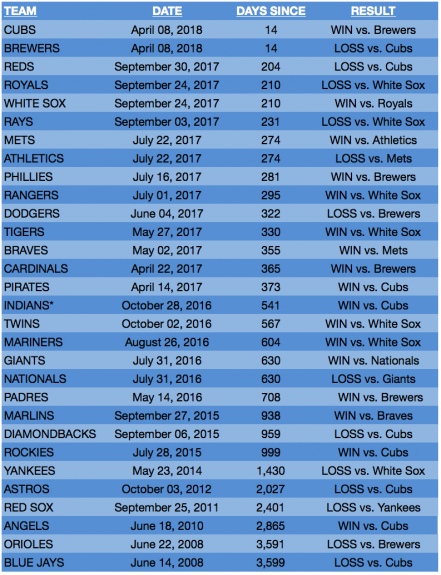 Fun Fact #2: Speaking of October 3, 2012, not only was that the last time I saw the Houston Astros play live, it was also my only two-city doubleheader. During the afternoon, Susan and I watched the Cubs defeat the Astros, 5-4, at Wrigley Field. Immediately following that game, we traveled to Milwaukee's Miller Park and watched the San Diego Padres defeat the Milwaukee Brewers, 7-6.