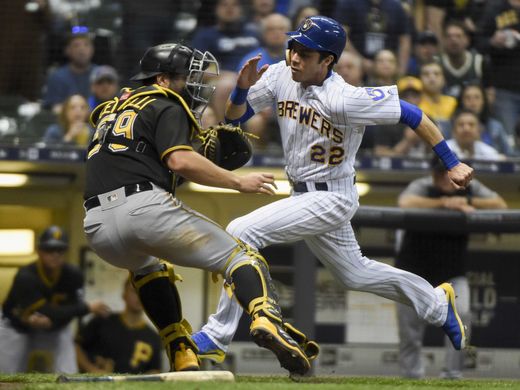 Tonight, I will be seeing a National League Central Division matchup between the Pittsburgh Pirates (18-15, .545) and the Milwaukee Brewers (19-14, .576). This will be my fourth MLB game of 2018, my second trip to Milwaukee's Miller this season, and my first game of the year without either of the two Chicago teams. Also, it's my first two games in Milwaukee between the Pirates and Brewers. The rematch is not until late August.

Milwaukee, currently in second place trailing the St. Louis Cardinals by half a game, could have been leading the pack had they not suffered a four-game sweep against the Chicago Cubs at Wrigley Field in late April. Friday night's loss, 6-4, to the Pirates did not help either.

The Brewers will answer with 30-year-old Jhoulys Chacin (2-1, 4.54 ERA). Chacin, like Taillon, has struggled going deep into games. This year, his best and longest start lasted six innings against the Miami Marlins. Against the Marlins, he allowed four hits and surrendered no runs.

(Not So) Fun Fact: Five years today, I attended a game at Miller Park between the Cardinals and Brewers. The Cardinals clobbered the Brewers, 10-1. I used that game as the basis of my Baseball 101: How to Score a Game blog series from 2013.

Update: Prior to first pitch, the Cardinals defeated the Cubs, 8-6, in extra innings. The Brewers enter tonight's game trailing the Cardinals by one game, the Pirates sit two games out of first.