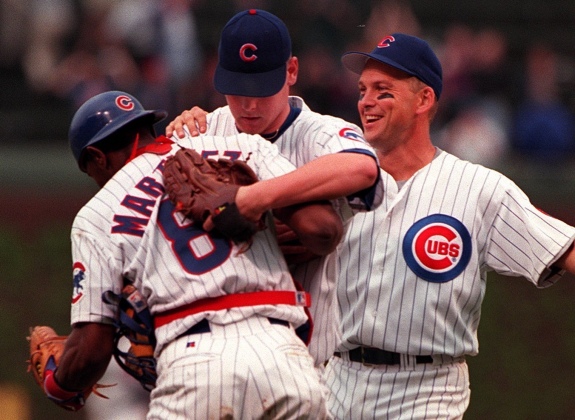 As the Chicago Cubs stormed the field in Cleveland following their Game Seven victory in 2016, franchise history changed in an instant. Since the team dates back to the inception of the National League, franchise lore is packed with legendary players and historic achievements, but it remains devoid of championships (just three World Series titles). The team is best known for a more-then-100-year-old ballpark and title drought that was even older. The World Series window remains wide open with the potential of more titles on the horizon.

During that offseason, I started to question how much team nostalgia mattered anymore. The New York Yankees are able to successfully balance team history with contemporary players because the franchise always remains relevant. The Yankees have won at least one World Series title in almost every complete decade since the 1920s (they had to settle for one American League pennant in the 1980s). The Cubs could always package single moments with a warm and fuzzy feeling, or a season that was so close to being meaningful. Think of the Homer in the Gloamin', the Sandberg Game, Kingman's homer down Kenmore, 1969, 1984 and 2003. It almost feels like none of those moments matter anymore. None of them resulted in championships. Expectations have been elevated at Clark and Addison.

Even though the Cubs have reached the NLCS for three consecutive seasons (2015-2017), and won a World Series title, it's still fun to relish in moments from yesteryear. Twenty years ago, one of those magic moments took place at Wrigley Field.

Kerry Wood was just a 20-year-old kid. He made his Cubs' debut on April 12, in Montreal's Olympic Stadium. Wood pitched 4 2/3 innings and allowed four earned runs, but he fanned seven Expos. On April 18, he made his second start and his first in front of the home crowd. Wood pitched five innings, allowed no runs, fanned seven Dodgers en route to his first MLB win. He was tagged with a loss against the Los Angeles Dodgers on April 24, in Dodger Stadium. He did not survive the second inning. Wood picked up his second career win against the St. Louis Cardinals at Wrigley Field. He made his longest start of the season by pitching seven innings. He also established a personal best with nine strikeouts.

On May 5, the Houston Astros, then a National League Central rival, made a stop at Wrigley Field. The defending NL Central champions throttled the Cubs, 10-5. But on May 6, Kerry Wood made his fifth career start, and third at Wrigley Field.

Two decades later, I still get chills thinking about Kerry Wood's pitching performance that afternoon. I am also disappointed to think that he never truly reached his potential. So much hope and promise was placed upon his shoulders, but it never came to fruition. Injury after injury plagued his career. Little did anyone realize his elbow was detaching during this outing. Still, I enjoy thinking back to that rainy day at Wrigley Field.

Oddly enough, most Cubs fans did not see this performance live. Of course it was a day game at Wrigley Field so most people were at work, but the game was not broadcast on WGN-TV. This game was one of the first broadcasts on CLTV. Back in 1998, CLTV was not available as a standard cable station throughout greater metropolitan Chicago. Some people had it and others did not. Of course, the game was rebroadcast on WGN-TV the very next day.

At the time, I was working at the Elmhurst Park District. That day, in fact, the park district's fundraising arm, the People for Elmhurst Park's Foundation (PEP) was hosting the Sugar Creek Open. The annual golf outing that raised funds for the park district's recreation assistance fund. I did not play golf that day, but I was working contest holes, selling raffle tickets, and so on. I remember the rain was heavy that morning and drizzling at the start of our event, but not enough to cancel the outing. Someone on the foundation's board realized that she did not tip the pizza delivery guy, so I volunteered to run cash over to Edwardo's Natural Pizza on Route 83. When I jumped in my car, I turned my radio to 720AM. I thought Pat Hughes and Ron Santo were exploding. At that point, Wood already had five strikeouts. Throughout the outing, I kept making trips to my car just to catch the strikeout total.

At the end of the game, Wood tied the Major-League record that Roger Clemens reached twice in his career. Eventually, Wood would land on the disabled list and not pitch until the National League Division Series (NLDS) against the Atlanta Braves later that season.

It looked like he was finally going to redeem his career in 2003, but as everyone knows, the Cubs famously lost to the Marlins during the National League Championship Series (NLCS).

Oh, and that t-shirt finally shredded and found the garbage can.