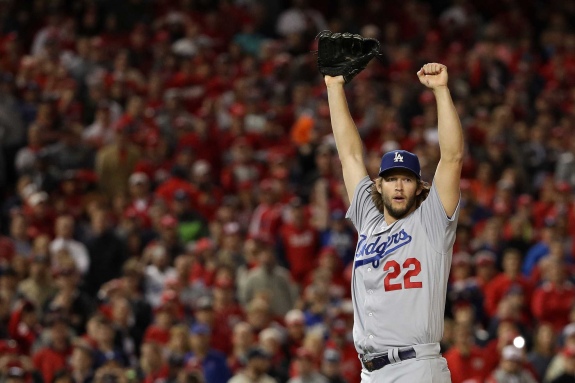 Clayton Kershaw, pictured celebrating his first career save against the Washington Nationals during Game Five of the 2016 NLDS, will take the hill for the Los Angeles Dodgers this evening.

He's been pitching for more than a decade. He's earned the National League Cy Young Award three times (2011, 2013, 2014), Most Valuable Player Award once (2014), and has been a seven-time all-star. He's won 147 career games and owns a 2.38 lifetime earned run average. He pitched in the postseason during seven of his 10 complete seasons in the big leagues. And until today, I have not seen Clayton Kershaw pitch live.

That changes this evening when the Milwaukee Brewers (55-44, .556) host the Los Angeles Dodgers (54-43, .557) at Miller Park. Despite being 11 games over .500, the Brewers have hit hard times and dropped their last seven games. The Chicago Cubs (56-39, .589) have taken advantage of Milwaukee's misfortune and won seven of their last 10 games. The second-place Brewers trail the Cubs by three games in the National League Central.

In the National League West, the Dodgers hold a one-and-half game lead over the Arizona Diamondbacks (53-45, .541). During the All-Star Game break, the Dodgers made a splash and acquired Manny Machado from the Baltimore Orioles. Machado made his Senior Circuit debut by batting second and finishing the evening going 2-for-3.

As previously mentioned, the Dodgers will start 30-year-old Clayton Kershaw (3-4, 2.74 ERA). Kershaw has pitched six-plus innings during each of his last three starts. During those three games, he has only allowed 12 hits, five earned runs and picked up two wins.

The Brewers will counter with 30-year-old Chase Anderson (6-7, 3.78 ERA). Anderson, during his last three starts, has only lasted 16 innings. He surrendered 17 hits, but only three earned runs.

Fun Fact: The last time I saw the Dodgers play live was against the Brewers on June 4, 2017. The Brewers blanked the Dodgers, 3-0. Eric Thames' first-inning home run off of starter Kenta Maeda was all Milwaukee needed. The Dodgers would eventually crush the Cubs during the 2017 NLCS and advance to the franchise's first World Series since 1988.