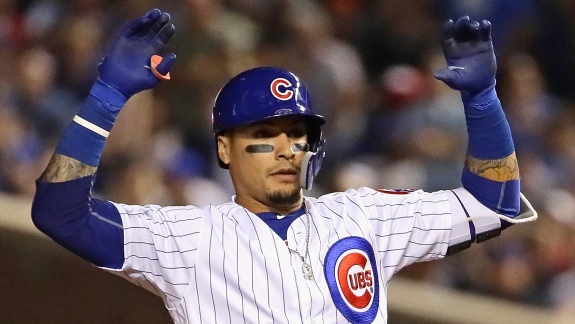 On Thursday night, Javy Baez finished the game 3-for-5. He homered, doubled and swiped a base.

The schedule may be working in their favor. During the middle of August, the Chicago Cubs (73-53, .579) offense vanished. For five consecutive games (August 16-21), they scored only one run per game. All five runs came via solo home runs. Still, they emerged victorious in two of the five games. But the Cubs rediscovered their bats and throttled the Detroit Tigers (53-75, .414) on Wednesday and the Cincinnati Reds (56-72, .438) on Thursday with scores of 8-2 and 7-1 respectively.

After splitting the two-game series with the Tigers at Comerica Park, and taking the first of four games against the Reds at Wrigley Field, the Cubs look to extend their division lead over the St. Louis Cardinals (71-57, .555) and Milwaukee Brewers (71-58, .550). The Cubs hold a three-game lead over the Cardinals and 3 1/2 games over the Brewers. As mentioned earlier, the schedule does not offer much resistance into the middle of next week. The Cubs have three games remaining against the Reds and three against the New York Mets (56-71, .441). The Reds sit in last place in the National League Central and trail the Cubs by 18 games. The Mets are currently in fourth place in the National League East and trail the Atlanta Braves (72-55, .567) by 16 games.

Last night, the Cubs opened the four-game series against the Reds with an outstanding pitching performance by recently acquired Cole Hamels (9-9, 3.82 ERA). Hamels pitched the Cubs' first complete game of the season and only allowed one run by scattering eight hits and two walks. Anthony Rizzo and Javy Baez both homered to fuel the offense. Baez's blast in the third inning was a mammoth 481-foot shot.

This afternoon, the Reds will send 29-year-old Matt Harvey (6-7, 4.91 ERA) to the mound. After making his MLB debut with the Mets in 2012, Harvey quickly became one of the games most promising young starters. He started the 2013 All-Star Game for the National League in his home park, Citi Field. After suffering an arm injury and missing all of 2014, Harvey led the Mets to the 2015 NL pennant. Following a rocky start to the 2018 season, Harvey was traded to the Reds in early May.

Alec Mills (0-0, 0.00 ERA) will make first MLB start this afternoon. The 26-year-old righty has limited big-league experience. Mills appeared in three games for the 2016 Kansas City Royals. He pitched 3 1/3 innings and allowed five earned runs. He returned to the majors with the Cubs on July 27, 2018. He lasted two innings and did not allow any walks or hits to the Cardinals.

Fun Fact: The last time I saw the Cubs and Reds play was my final game of the 2017 season. The Cubs, who already clinched the NL Central title, hammered the Reds that afternoon, 9-0. Kyle Schwarber finished the game 2-for-4 with a home run and four runs batted in.

Update: The Milwaukee Brewers have claimed Matt Harvey on waivers. The Brewers and Reds have until 12:30 p.m. Central Time to work out a deal. If so, Harvey will not be starting today's game.