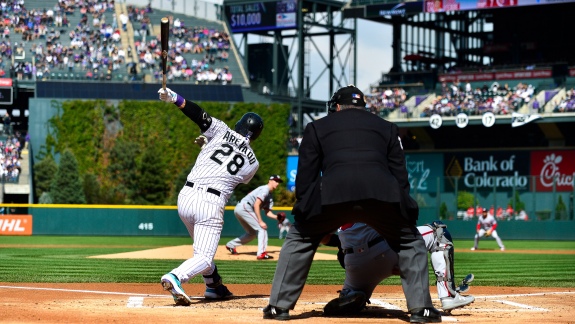 On the final day of the regular season, four teams needed wins to extend their dreams of winning division titles. All four teams responded by throttling their opponents and plating 10 or more runs in the process. While all 10 postseason contenders were determined days ago, the National League's Central and West champions have not been crowned. As a result, the positioning with the two NL Wild Card teams remains in flux.

The game at AT&T Park was the first to go final. Two franchises with a contentious history dating back to their days in New York was the first to go final. The Los Angeles Dodgers (91-71, .562) jumped on the San Francisco Giants (73-89, .451) early and often. When Justin Turner doubled in the top of the first to score Chris Taylor, the Dodgers had all of the offense they would need. Three Dodgers pitchers combined to allow only two hits. Rich Hill (11-5, 3.66 ERA) surrendered both during his seven innings of work. With a 2-0 lead heading into the top of the third, the Dodgers opened the floodgates and scored seven runs. They proceeded to lock up a 15-0 win, to grab a tenuous half-game lead in the NL West over the Colorado Rockies.

In the Mile High City, the Rockies (91-71, .562) also seized an early first-inning 2-0 lead. Like the Giants, the Washington Nationals (82-80, .506) failed to answer. Colorado's leadoff hitter, center fielder Charlie Blackmon set the pace by hitting for the cycle at Coors Field. He ended the game batting 4-for-5 and three runs batted in. The Rockies proceeded to score 12 runs and force a 163rd game to determine the NL West which team will enter the postseason as the division-winner or the second NL Wild Card. But which team will the winner face in the NL Wild Card game?

Christian Yelich helped the Milwaukee Brewers (95-67, .586) win the franchise's last seven games to tie the Chicago Cubs atop the NL Central standings. A similar situation was brewing in the NL Central. Just as the Dodgers and Rockies did, the Brewers also pushed two runs across the plate in the first inning against the Detroit Tigers (64-98 .395) at Miller Park. Ryan Braun and Jesus Aguilar made the difference by batting 2-for-3 and 2-for-5 respectively. Aguilar slugged his 35th home run of the season en route to knocking in three runs. If the St. Louis Cardinals could defeat the Cubs, the Brewers would win the NL Central.

Of the four teams playing in meaningful games this afternoon, the Chicago Cubs (95-67, .586) were the only team that needed a rally to win. The St. Louis Cardinals (88-74, .543) grabbed a first-inning 2-0 lead at Wrigley Field. During the bottom of the third inning, the Cubs plated four runs and grabbed a lead they failed to relinquish. The most tense moment came during the top of the seventh inning when the Cardinals loaded the bases after cutting the Cubs' lead to 10-5. The Cubs shut down the Cardinals threat and never looked back. Cubs' first baseman, Anthony Rizzo finished the game 4-for-4 with one run batted in.

With the Dodgers, Rockies, Brewers and Cubs all winning, the National League will host two tiebreaker games on Monday afternoon. The Brewers are traveling to Chicago this evening to battle the Cubs at Wrigley Field at 12:05 p.m. Central on Monday. The Dodgers and Rockies will travel to Dodger Stadium to determine their fates at 4:09 p.m. on Monday.

The late Ernie Banks would be pleased. Labeled as hopelessly optimistic, the Cubs hall-of-fame shortstop and first baseman coined the phrase, "It's a great day for a ball game; let's play two." That will happen tomorrow with a lot at stake.