Beantown vs. City of Angels 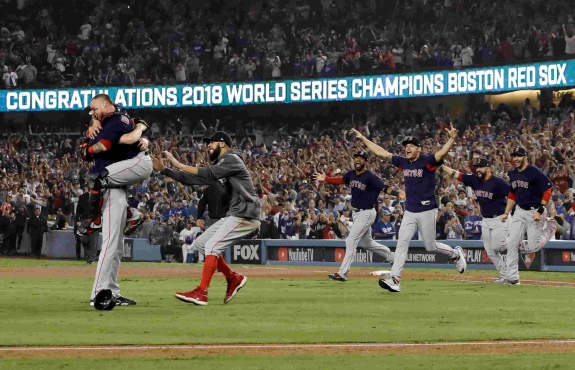 The Boston Red Sox defeated the Los Angeles Dodgers in the 2018 World Series.

Those damn Yankees could not claim that title forever. Boston certainly did not steal the moniker in 2004. When the Boston Red Sox needed a full slate of seven games to vanquish their archrivals, the New York Yankees, during the American League Championship Series (ALCS), they exorcized a demon. In dramatic fashion, they dethroned the so-called Evil Empire. Seemingly every fan base found a rooting interest in the underdogs affectionately labeled as a "bunch of idiots" from Red Sox Nation. Following a World Series sweep of the St. Louis Cardinals, the Red Sox were champions of baseball for the first time since George Herman Ruth was a Red Sox hurler in 1918. Perhaps Harry Frazee's soul found redemption.

Not long after Boston teams won Super Bowl XXXVI and the 2004 World Series, more championships followed. Tom Brady led the Patriots to seven additional Super Bowl appearances winning four more titles. The Red Sox followed their curse-breaking World Series title in 2004 with additional championships in 2007, 2013 and 2018. Even the Boston Bruins hoisted a Stanley Cup in 2011. With a wave a success, Boston's teams transformed from underdogs to the role of villains.

This evening, the New England Patriots will represent the AFC in the franchise's third consecutive Super Bowl, and its record-setting 11th time overall. Let's be honest, the New Orleans Saints should be representing the NFC tonight, but a missed pass interference call last during the NFC Championship Game opened the door for the Los Angeles Rams for a 26-23 overtime win.

Last year, we analyzed the World Series history between the two cities involved in Super Bowl LII (Boston and Philadelphia). Even with four different teams for a substantial period of time, that history was limited, but reached back more than a century. This year, we are doing the same with Super Bowl LIII's combatants (Boston and Los Angeles). Much the same, Boston and Los Angeles both featured four potential teams and produced a limited history. Unlike last year, that history only extends back to the most recent fall classic between the Boston Red Sox and Los Angeles Dodgers.

2018 World Series: Boston Red Sox defeat Los Angeles Dodgers (4-1)
For two cities with legendary franchises, surprisingly, the Red Sox and Dodgers have only raised their respective pennants during the same season once. Red Sox history dates back to the founding of the American League in 1901. Dodgers history stretches back even farther to 1884 when they were the Brooklyn Atlantics of the American Association. Being fair, more than half a century of overlapping history gets tossed to the wayside since the Dodgers have only called Los Angeles home since 1958.

Last year, the Red Sox assembled a historic season by winning 108 regular-season games. That feat established a new all-time franchise record by breaking the mark of the 1912 World Series-winning team (105). To frame that achievement in the proper context, the Red Sox moved to Fenway Park in 1912. During the American League playoffs, they made quick work of the Yankees (3-1) then eliminated the defending World Series champions, the Houston Astros (4-1).

For the second consecutive season, the Dodgers were National League pennant winners. In 2017, they stretched the Astros to seven games in the World Series, be ultimately fell short. During the 2018 National League playoffs, Los Angeles defeated the Atlanta Braves (3-1) then eliminated the Milwaukee Brewers (4-3).

The 2018 World Series was over in a heartbeat. Boston won the first two games in Fenway Park, 8-4 and 4-2, respectively. During those two games, the Dodgers only led once when they held a 2-1 lead from the top of the fourth inning until the bottom of the fifth.

If the Series had any drama, it came in Game Three, which lasted seven hours and 20 minutes. Los Angeles grabbed a 1-0 in the bottom of the third inning courtesy of Joc Pederson's solo home run. The Dodgers would maintain the lead until Jackie Bradley connected with a solo blast off of closer Kenley Jansen. Both teams added solo tallies during the 13th inning. With the score knotted at two, Max Muncy prevented a Red Sox sweep when he hammered a solo home run off of Nathan Eovaldi to give the Dodgers a 3-2 victory at Dodger Stadium.

Los Angeles failed to force the Series back to Fenway Park. Boston closed out the Series at Chavez Ravine winning the fourth and fifth games 9-6 and 5-1. Despite grabbing a 4-0 lead late in Game Four, the Dodgers allowed the Red Sox to plate three runs in the seventh, one in the eighth and five in the ninth. The Dodgers added two more in the bottom of the ninth, but it was too little too late. During Game Five, Boston jumped on Clayton Kershaw and scored twice in the top of the first inning. Los Angeles answered with a run in the bottom of the first, but that was the only offense they could generate. Game One starter, Chris Sale (12-4, 2.11 ERA) entered the game as a reliever and pitched the ninth inning. Sale fanned Justin Turner, Enrique Hernandez and Manny Machado to secure Boston's fourth World Series title in the 21st century and ninth overall.

In odd symmetry, the outcome of the 2018 World Series mirrored that of 1916, the only other team the two franchises met during the Fall Classic. The Red Sox defeated the Dodgers (then known as the Brooklyn Robins in honor of manager Wilbert Robinson) four games to one. Boston won the first two games (played at Boston's new National League facility Braves Field), dropped Game Three at Brooklyn's Ebbets Field then won the final two games.

Back to Football for a Moment 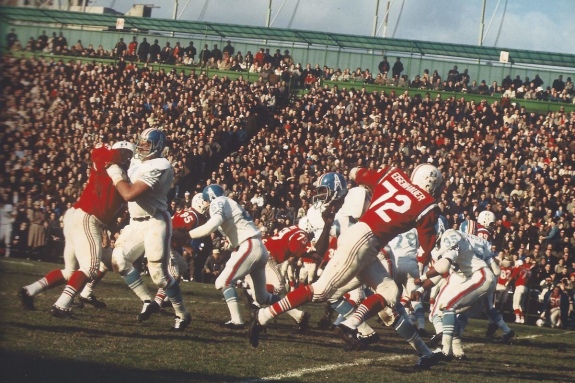 The New England Patriots franchise dates back to the founding of the American Football League (AFL) in 1960. Throughout the team's early years (known as the Boston Patriots from 1960 through 1971), they shared significant baseball facilities. Boston University's Nickerson Field, the team's original home, was constructed on the site of the former Braves Field. While technically not the old baseball stadium, the new football complex incorporated portions of Braves Field's entry gate and right field pavilion into Nickerson Field. From 1963 through 1968, the Patriots shared Fenway Park with the Red Sox. 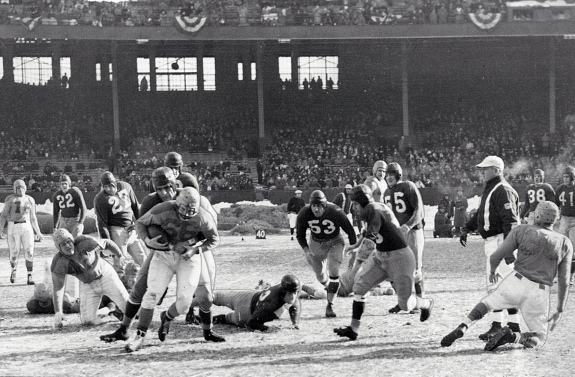 The Cleveland Rams defeat the Washington Redskin, 15-14, to win the 1945 NFL Championship at Cleveland Stadium.

While the Patriots have altered their name and played in multiple stadia, the Rams have been far more nomadic. The Rams played in Cleveland from 1937 through 1945 (they suspended operations in 1943 due to World War II). During the football team's tenure in Cleveland, they shared Cleveland Stadium and League Park with the American League's Cleveland Indians.

For two decades (1995-2015), the Rams called St. Louis home. During the team's inaugural season in St. Louis, they shared Busch Stadium with the St. Louis Cardinals for their first three home games before moving into the TWA Dome.

Beginning in 2016, the Rams returned to Los Angeles and the Coliseum and await the opening of Los Angeles Stadium at Hollywood Park slated to open in time for the 2020 season.