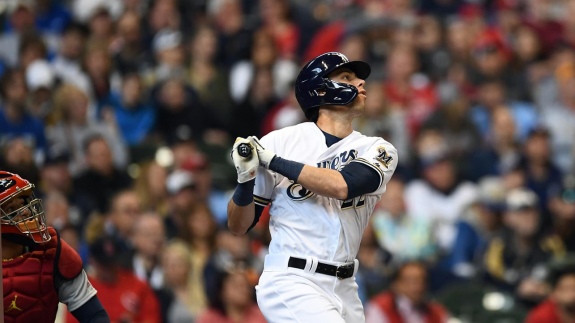 Rewind to Game 1 of the 2018 National League Championship Series. We were seated in Miller Park's upper deck on the third base side as Milwaukee Brewers manager Craig Counsell pulled starting pitcher Gio Gonzalez after two innings and handed the ball to reliever Brandon Woodruff to start the third. Woodruff not only provided two scoreless innings and earned the win, but he also hammered a solo home run off of Los Angeles Dodgers ace Clayton Kershaw in the bottom of the third inning. The Brewers claimed an early 1-0 NLCS lead.

As Opening Week continues, the Brewers and Cardinals split the first two games of a 4-game series in Milwaukee. Milwaukee won the opener, 5-4, but the Cardinals claimed last night's game, 9-5. Both teams quickly quelled any doubts about early-season offensive production as St. Louis and Milwaukee combined for 11 home runs during the first two games. The Cardinals cleared the wall six times. Paul Goldschmidt slugged three last night alone. During the opener, Kolten Wong hit two and Harrison Bader contributed one. The Brewers belted five. Reigning NL MVP, Christian Yelich, hit one in each game. Ryan Braun, Mike Moustakas and Jhoulys Chacin (yes, the pitcher) each have one of their own.

To kick off the 2019 season, here is the last time I watched each MLB team play live during a regular-season or postseason game. Sorry, spring training does not count. 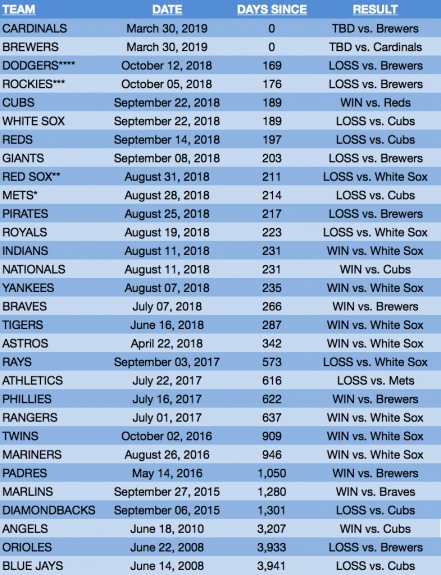 Edit: The team chart posted on February 5, 2019, incorrectly listed the last Chicago White Sox game as a win against the Boston Red Sox. It should have been a loss to the Chicago Cubs.