Baseball maverick Bill Veeck couldn't have written a better script to welcome Chicago White Sox fans into Comiskey Park for the team's home opener on Tuesday, April 14. His team opened the 1959 campaign by completing a three-game sweep of the Detroit Tigers on the road at Briggs Stadium.

Rewind to 1958's holiday season. Since the White Sox became a charter franchise in the American League in 1900, Charles Comiskey and his heirs held majority ownership of the team, but that changed. On December 20, 1958, Veeck and his group of partners gained a controlling interest in the city's Junior Circuit franchise. As part of the home-opening festivities, Veeck toed the pitching rubber and threw a ceremonial first pitch to the Old Roman's grandson, Chuck. Chuck Comiskey, still a part owner, remained the team's largest single shareholder. 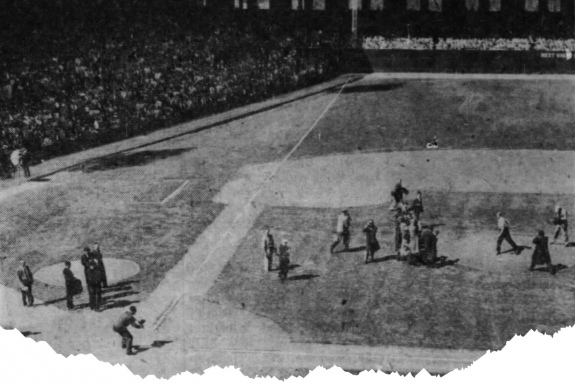 Only 19,303 fans made the trek to Comiskey Park to watch the undefeated White Sox host the winless Kansas City Athletics. "A somewhat disappointing turnout," is how the Chicago Tribune's Richard Dozer described the crowd. During his second start of the season, Billy Pierce pitched the distance scattered six hits and refused to allow a run. Luis Aparicio produced the necessary offense in the bottom of the fifth inning when he singled off of Ralph Terry to score Johnny Callison and Bubba Phillips.

Eventually, all winning streaks come to an end. Manager Harry Craft's winless Athletics were up to the challenge and hit their stride during the final two games of the series. On Wednesday, April 16, Kansas City's lineup pulverized White Sox starter Barry Latman by scoring eight runs against him in just 2 2/3 innings. Sox fans found little solace noting that six of the runs were unearned. Kansas City generated all of its offense, 10 runs, during the first four innings against Latman and Claude Raymond. The most significant blow was a third-inning grand slam by Kansas City pitcher Bob Grim. Bob Shaw, Rudy Arias, Gerry Staley and Turk Lown combined for 4 1/3 scoreless innings.

For most the game, it appeared that Aparicio's RBI double in the third would be the totality of Chicago's offense, but the White Sox rallied late with a seven-run eighth inning. Norm Cash, Al Smith and Phillips each contributed RBI singles. Earl Battey, pinch-hitting for Staley, walked with the bases loaded. Aparicio knocked in two more with a double, then Jim Landis added another bases-loaded walk. Athletics reliever Tom Gorman stopped the bleeding with two infield flies. Neither team would score in the ninth ending the game, 10-8.

Naturally, attendance will tail off early in the season following opening day's buzz. But, if attendance under the 20,000 mark for the home opener was disappointing, Wednesday's attendance of 4,713 was even worse. For Thursday's third and final game against the Athletics, attendance dipped again. Only 3,211 fans made Comiskey Park's turnstiles spin to see Ned Garver pitch a complete-game, five-hitter against Early Wynn.

Generating only five hits, the White Sox never posed a serious threat against the Athletics. During the bottom of the eighth inning, Billy Goodman and Aparicio stood on third and second respectively with two outs, but neither runner crossed the plate. Frank House's two-run homer to deep right field off of Wynn was the only offense needed to bury the Sox. Kansas City added insurance runs in the top half of the sixth when Tom Carroll singled home Kent Hadley then Whitey Herzog drove Carroll home. Bob Cerv's seventh-inning, two-run blast finished the scoring. Kansas City departed from Chicago with a 6-0 win, and they took two of three games in the series.

As Kansas City left town, the Detroit Tigers moved in for a planned three-game weekend series. Mother Nature would intervene and limit the series to only Friday and Saturday games.

Neither Detroit's Frank Lary nor Chicago's Dick Donovan survive the sixth inning. Shortstop Rocky Bridges grounded into a 5-4 fielder's choice that scored Gail Harris and gave the Tigers and early 1-0 lead. Lary kept the White Sox scoreless until the bottom of the fourth.

With Landis on second and Sherm Lollar on first, Cash crushed Lary's pitch to deep center field to give the White Sox a 3-1 edge. Detroit responded in the top of the fifth when Eddie Yost, with Lou Berberet on first, hit a two-run blast knotting the score at three apiece. Then, Al Kaline clubbed a solo shot in the top of the sixth to reclaim a one-run lead.

White Sox pinch hitter, Earl Torgeson, singled and drove Landis home in the bottom of the sixth. Once Landis touched home plate, Detroit's manager Bill Norman snatched the ball from Lary and handed it to Tom Morgan. Morgan closed out the sixth and seventh innings unscathed. Sox manager Al Lopez protested the game claiming that Tigers pitcher Ray Narleski fanned Smith by quick-pitching the third strike. With two outs in the bottom of the eighth, Landis and Cash stood on second and first. Jim Rivera doubled off of Narleski driving home two runs. The White Sox regained the lead, 6-4.

Detroit managed one additional run when Harris grounded into a 4-6 fielder's choice and Harvey Kuenn crossed the plate. Lown recorded the two final outs to secure a 6-5 win for the White Sox.

On Saturday, April 18, the Tigers grabbed a 2-0 lead in the top of the third. Kuenn's sacrifice fly scored Berberet from third, then Kaline's single Yost. The score would hold until the top of the seventh when Detroit plated two more courtesy of Yost's two-run blast.

Chicago answered in the bottom of the frame by cutting Detroit's lead in half. Torgeson, pinch-hitting for Sammy Esposito, grounded into a 4-3 fielder's choice and scored Lou Skizas. Goodman followed by singling home John Romano. Detroit held a 4-2 lead until they added an insurance run in the top of the ninth when Johnny Groth singled home Kuenn. Morgan shut down the Sox in the bottom of the ninth to secure a 5-2 victory.

On Sunday afternoon, temperatures lingered in the upper 30s at the corner of Shields Avenue and 35th Street. The Tribune's Dozer noted that only a few hundred fans attempted to brave the elements for Sunday's rubber match between the Tigers and White Sox. The same two teams endured frigid elements in Detroit on Opening Day at Briggs Stadium when they battled for 14 innings. Sixty-three-year-old umpire Bill Summers met with representatives from both teams and the grounds crew and ultimately decided to cancel the game. Originally, officials stated the two teams would meet under the lights on May 28 to play the canceled game, but it ultimately would be played as the second game of a doubleheader on September 2.

The White Sox finished the weather-shortened home stand by dropping three of the five contests. After rattling off four consecutive victories to open the season, the South Siders sat in second place two games behind the undefeated Cleveland Indians and tied with the New York Yankees. The team enjoyed two days of rest before starting a six-game road trip to Kansas City and Cleveland.

The Cold War was an ominous threat in 1959. In the April 19th Chicago Tribune, the 14th Dalai Lama, 23-year-old Tenzin Gyatso, shared the story of his escape from Norbulingka Palace to India disguised as a poor monk. Chinese Communist Premier Chou En-lai was adamant that the Dalai Lama was "abducted" to India.