The Chicago Tribune highlights the Chicago Cubs' first win of the season, a home run-heavy victory, against the Pittsburgh Pirates.

After dropping the season opener 4-3 to the Pittsburgh Pirates at Wrigley Field, Joe McCarthy's Chicago Cubs answered violently taking the next two games. On Wednesday, April 17, the Cubs produced all of the runs they needed to secure their first victory of the season in the bottom of the first inning. 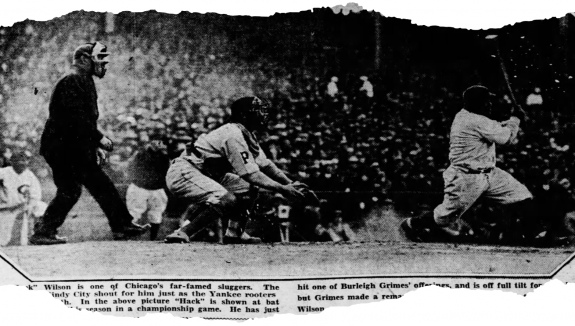 The Cubs proceeded to add single runs in the fourth, sixth and seventh innings before unloading again in the eighth. Charlie Grimm homered in the fourth, Beck walked with the bags full in the sixth, then Grimm drove home Wilson on a seventh-inning sacrifice fly. With one out and the bases loaded, new Cubs second baseman Rogers Hornsby clubbed a grand slam that plated Pat Malone, Beck and Kiki Cuyler. Later in the inning, Grimm added another RBI when he singled to left field scoring Wilson giving the Cubs a 13-0 lead.

Chicago's Malone stymied the Pirates' offense pitching a six-hit complete game. The game was out of hand by the time Malone faced his only moment of adversity. With two outs in the top of the ninth, Malone face Erv Brame with runners on the corners. Malone threw a wild pitch that allowed George Grantham to score from third and Dick Bartell to advance to third. Brame then singled to score Bartell. Sparky Adams ended the game when he popped out to Wilson in center. The Cubs logged their first win of the season, 13-2.

On April 18, the Cubs demonstrated that Wednesday's onslaught was not a fluke. By the end of the third inning, the North Siders generated enough offense to secure pitcher Sheriff Blake (who pitched in relief on Opening Day) his first win of the 1929 campaign. Blake's only shaking inning came in the first. With no outs and the bases loaded, Pie Traynor grounded into a double play that scored Adams. Since Adams reached first on shortstop English's error, the run was unearned. From there, it was smooth sailing for Blake.

Cuyler's RBI single in the bottom of the opening frame tied the score. Grimm secured the win in the bottom of the third when he belted a grand slam off of Pittsburgh starter Jesse Petty. Wilson hit a two-run homer in the fifth then English walked with the bases loaded later that inning to give the Cubs a commanding 8-1 lead.

In the bottom of the eighth, Wilson continued his torrid hitting streak with a two-run double that drove home Culyer and Hornsby. The next hitter, Stephenson, answered with an RBI double of his own. The Cubs scored 11 unanswered runs to win the third game of the series, 11-1.

If Pittsburgh's pitching staff could not contain the Cubs offense, Mother Nature did. On Friday afternoon, adverse weather cut the planned four-game series short. In fact, storms lingered long enough to delay the start of the series against the St. Louis Cardinals. 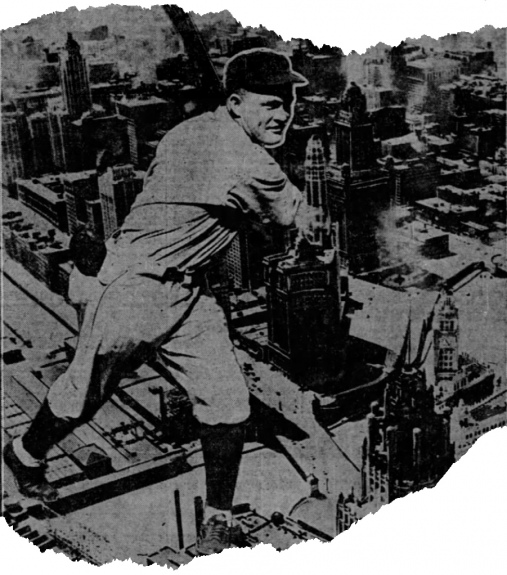 Rogers Hornsby made an instant impact after joining the Chicago Cubs.

Chicago's starting pitcher, Guy Bush, welcomed the Cardinals to Wrigley Field on Sunday, April 21, and limited them to just three hits. Bush's shutout was the Cubs' third consecutive complete game of the young season. Neither Baseball Reference nor Retrosheet have been able to compile accurate play-by-play descriptions of this game, but the Cubs won 4-0. Regardless, Hornsby continued his offensive onslaught by finishing the game 4-for-4 driving in two runs. Stephenson and Mike Gonzalez each contributed their own RBI. Bush only surrendered hits to St. Louis' Taylor Douthit, Frankie Frisch and the 38-year-old pitcher Clarence Mitchell (who was identified in the St. Louis Star on April 20 as "the ancient southpaw").