The Chicago White Sox generated their largest offensive output of the season, 20 runs, against the Kansas City Athletics on Wednesday, April 22.

Following the conclusion of their first homestand of the season, the Chicago White Sox traveled to Kansas City for a brief two-game series against the Athletics at Municipal Stadium. Just a few days earlier, the Athletics gave the White Sox their first taste of defeat. Not only did they end Chicago's 4-0 start, but they also won two of three at Comiskey Park.

For five seasons, the Athletics have called Kansas City home. Connie Mack, the founder and former owner of the Philadelphia Athletics passed away in early 1956. He only lived to see his former team play one losing season in the Great Plains.

On Tuesday, April 21, the Athletics continued their winning ways over the South Siders. Kansas City's Bob Grim held the White Sox scoreless until the sixth inning. He pitched a complete-game, four-hitter and allowed only three runs. Kansas City, however, jumped on Billy Pierce who only lasted two innings.

In the bottom of the first, Roger Maris (whose greatest and most challenging days were still ahead of him) singled off of Pierce scoring Bill Tuttle. While Pierce managed to escape the first inning, he ran into a steamroller in the second. Dick Williams hit a two-out, bases-loaded single that scored Frank House and Grim. The next batter, Hector Lopez, reached base on an error by Al Smith and scored Tuttle and Williams. Williams added an insurance run off of Sox reliever Bob Shaw in the bottom of the fourth when doubled home House.

The White Sox finally made a dent against Grim in the top of the sixth. With runners on first and second, Sherm Lollar hit a double to left field that plated Nellie Fox and Jim Landis. The Athletics answered in the bottom of the frame with one more run when Claude Raymond's sacrifice fly knocked in Joe DeMaestri. Johnny Callison connected for a home run off of Grim, but that was all Chicago could muster.

Kansas City's Hal Smith generated the final offense for the day when he reached on a Fox error and scored Lopez from third. The Athletics won the first of two games, 8-3.

To close out the two-game set on Wednesday, April 22, the White Sox unloaded. After falling behind 6-1 after two, the South Siders unloaded with 19 unanswered runs. The highlight of the game was the 11-run seventh inning. Fox finished the day batting 4-for-5 with five runs batted in, and Luis Aparicio was 3-for-4 with four RBI.

Kansas City knocked starting pitcher Early Wynn out of the game before the end of the second inning, but Shaw pitched 7 1/3 innings of relief to earn the win. Wynn allowed six earned runs in his brief 1 2/3 innings. Athletics starter Ned Garver failed to survive the fourth inning, then they hammered through five relievers.

During the seventh-inning onslaught, the White Sox pushed 11 runners across the plate courtesy of just one hit. Callison recorded the lone hit with a single off of Tom Gordon that scored Ray Boone. The Athletics committed three errors during the frame, allowed 10 walks and hit one batter. Chicago nearly batted around two during the inning as 17 batters came to the plate. Chicago's 20-6 win was the team's most prolific offensive production of the season.

The Cleveland Indians recorded their 10th win of the season by beating the White Sox, 6-4, during their series opener.

Following an off day on Thursday, the White Sox traveled to Cleveland Stadium to battle the league-leading Cleveland Indians for four games. Entering the series, the Indians sat atop the American League with a 9-1 record and a three-game lead over the White Sox.

Entering the bottom of the seventh, Chicago held a 4-1 lead over Cleveland. Minnie Minoso, a former White Sox fan favorite, started the rally with a single off of Dick Donovan. Donovan hit Rocky Colavito with a pitch then Russ Nixon connected with an RBI single. Manager Al Lopez handed the ball to Turk Lown. After Lown retired Hal Naragon, he allowed a two-run single to Tito Francona that tied the game at four runs apiece.

Cleveland added the winning runs in the bottom of the eighth. With Jim Bolger at the plate, Vic Power scored on a bases-loaded passed ball by Rudy Arias. Arias followed with an intentional walk to George Strickland to load the bases. Shaw relieved Arias then Woodie Held hit a sacrifice fly that sent Minoso home for a 6-4 win.

After losing the series opener, the White Sox made a run at first place by winning the final three games of the series. On Saturday, Chicago needed a five-run ninth inning to hand Cleveland its second loss of the season. The White held a 3-1 lead heading to the bottom of the seventh. During the bottom of the frame, Francona singled to score Billy Martin, Power doubled to score pinch-runner Carroll Hardy then Colavito homered. The Indians claimed a 5-3 lead.

Chicago rallied for five runs in the top of the ninth courtesy of three Cleveland errors, two errors, a wild pitch and an Earl Torgeson three-run homer. The Indians would score once more in the bottom of the ninth, but the White Sox held on to win, 8-6.

By taking three of four against the Indians, the White Sox trimmed Cleveland's American League lead from 3 1/2 games to one.

The series concluded on Sunday, April 26 with a doubleheader. Wynn earned a win in the first game allowing five runs (only three earned) in five innings. The totality of the White Sox offensive output came in the top of the fourth. Cleveland's Don Ferrarese allowed an RBI single to Bubba Phillips and a two-run double to Wynn. Indians manager Joe Gordon handed the ball to Al Cicotte, the great nephew of infamous White Sox hurler Eddie Cicotte. Cicotte issued RBI walks to Landis and Boone. Jim Rivera entered as a pinch hitter for Lou Skizas and hit a sacrifice fly that drove home Fox. Cleveland rallied in the home half of the fifth and sixth innings, partially due to three White Sox errors, but Chicago would cling to a 6-5 win.

Chicago would claim the second game of the series-ending doubleheader with a 5-2 win. Pierce earned his second win of the season by pitching a complete game and scattering eight hits. After grabbing three runs in the top of the second inning, the White Sox never trailed. Landis added an RBI single off of Cleveland's starter, Gary Bell. Pierce helped his own cause by doubling home Smith and Landis. The only blemish on Pierce's performance was a Martin RBI single in the seventh and a Dick Brown RBI single in the bottom of the ninth. 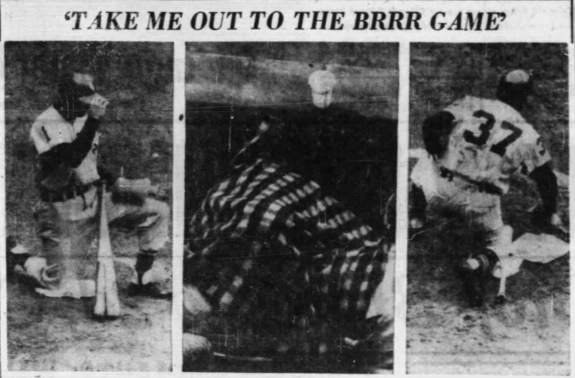 After taking three of four against in the series, Chicago cut Cleveland's American League lead down to one game. The White Sox and Baltimore Orioles shared second place with identical 9-5 records. Chicago concluded its six-game road trip to Kansas City and Cleveland by winning four of six.

A Strange Way to Ignite the Offense.... 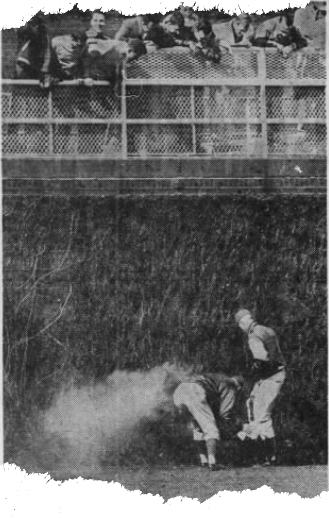 During the bottom of the third inning on April 23, the St. Louis Cardinals and Chicago Cubs were tied, 0-0. After Cardinals pitcher Lindy McDaniel retired the side, a fan seated in Wrigley Field's left-field bleachers dropped a cigarette and caused the ivy vines to catch on fire. Cubs coach El Tappe and pitcher Elmer Singleton served as volunteer firefighters and extinguished the flames. The Cubs would beat the Cardinals, 6-1.