The New York Yankees, who dominated the 1950s, arrived at Comiskey Park and won the series opener.

Throughout the 1950s, the New York Yankees stood head and shoulders above the rest. Not just the best in the American League, but the standard throughout the majors. During the 1950s alone, the Bronx Bombers won World Series titles from 1950 through 1953, again in 1956, and finally in 1958. They settled for American League pennants in 1955 and 1957. They only missed the Fall Classic in 1954 when the Cleveland Indians won the AL flag. In 1959, they would have to wrestle with the Chicago White Sox.

When Casey Stengel's Yankees the defending World Series champions arrived in Chicago, inclement weather loomed once again. The White Sox and Yankees series opener, originally scheduled for Tuesday, April 28, was pushed to Thursday on account of rain. But when the two teams battled the following day, Mickey Mantle left a mark in the top of the first inning at Comiskey Park. Mantle's two-run shot set the pace until the bottom of the third.

Jim Landis' two-out single scored Luis Aparicio and cut the Yankees' lead in half. But Stengel's men responded in the top of the fourth when Gil McDougald popped out to first baseman Norm Cash in foul territory and drove Mantle home. Right fielder Hank Bauer added a solo blast in the top of the fifth.

During the bottom of the fifth, Chicago's Nellie Fox hit a one-out single off of Bob Turley that scored Ron Jackson. With the Yankees leading 4-2 in the top of the seventh, Chicago native Bill "Moose" Skowron clubbed a solo home run off of Turk Lown. Turley pitched a two-run complete game, while Ray Moore was driven from the game after five frames and four runs. The Yankees claimed the series opener, 5-2.

The two teams closed out April and the series with an 11-inning affair in front of 26,944 fans at Comiskey Park. New York sent Whitey Ford to the mound to battle Billy Pierce. Like on Wednesday, the Bronx Bombers seized an early 2-0 lead courtesy of Skowron's two-out, two-run double in the top of the third. Fox answered with an RBI single in the bottom of the frame.

Chicago grabbed stole the lead in the bottom of the sixth following a Sherm Lollar solo home run and an Aparicio single that scored Bubba Phillips. New York ultimately forced extra innings when Pierce tossed a wild pitch with Enos Slaughter at the plate. Yogi Berra crossed the plate and evened the score, 3-3. With two outs and the bases loaded in the 11th inning, Chicago's Al Smith singled home and scored Fox to secure a 4-3 win for the White Sox. Pierce earned the win after pitching all 11 innings.

When the calendar flipped to May, the Boston Red Sox arrived at Comiskey Park. All 13,022 fans witnessed an outstanding pitching duel. Boston's Tom Brewer scattered five hits over eight innings. Chicago's Early Wynn surrendered seven walks and one hit to log a complete-game win. Pete Runnels recorded Boston's lone hit with one out in the top of the first inning. Despite a solid pitching matchup happening before their eyes, Chicago did not secure the win until starting pitcher Wynn clubbed a solo home run to leadoff the bottom of the eighth inning. The White Sox would claim the series-opening win, 1-0.

On May 2, Boston answered quickly by stretching a 4-0 lead into the bottom of the eighth inning. Landis and Smith won their battles against Ike Delock by hitting a sacrifice fly and singling to score Fox and Del Ennis respectively. Trailing 5-2 in the bottom of the ninth, Aparicio took Murray Wall deep with a one-out, two-run homer. Boston held on to win, 5-4. Jackie Jensen and Runnels each contributed home runs.

Prior to that day's game, the Sox announced that they traded Don Rudolph to the Cincinnati Reds for Ennis. Also a part of the deal, Chicago sent Lou Skizas to Havana of the International League (Cincinnati farm team). 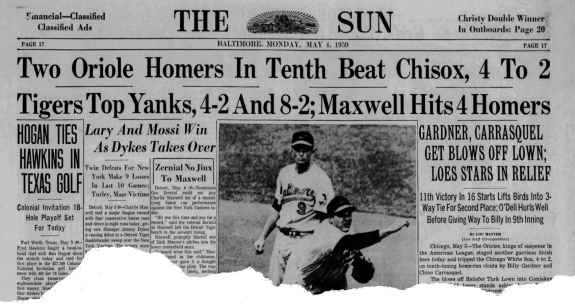 The Baltimore Orioles and Chicago White Sox only played one game at Comiskey Park, and the Orioles emerged victorious.

Following the 1953 season, the St. Louis Browns packed their bags and relocated in Maryland. Rebranded as the Baltimore Orioles, the team picked up where the Browns left off. During the franchise's first five seasons in Baltimore, the Orioles only reached .500 once. In 1957, they finished 76-76.

On Sunday, May 3, the White Sox extended their 1-0 lead to the top of the sixth inning. Jackson's solo home run off of Billy O'Dell would not be enough to secure the win. Dick Donovan surrendered a two-out double to Gene Woodling in the sixth that drove home Chico Carrasquel. Bob Boyd added an RBI single in the eighth to give Baltimore a 2-1 edge.

Chicago's John Romano evened the score with a solo home run in the bottom of the eighth. The score remained tied until the top of the 10th inning. With Lown on the hill relieving Donovan, Billy Gardner and Carrasquel each slugged solo home runs to give Baltimore a 4-2 lead. Orioles reliever, Billy Loes, provided relief by retiring the side in the bottom of the frame.