Chicago's Opening Day starting pitcher earned his first win of the season against the Cincinnati Reds.

The Chicago Cubs and Cincinnati Reds enjoyed a raucous affair during their first meeting of the 1929 season. In total, the two teams combined to send 29 runners across the plate at Redland Field. The next three games were significantly less maddening.

On Monday, April 29, Chicago's Charlie Root and Cincinnati's Pete Donohue matched wits on the mound. Root, who remained winless entering Monday's action, pitched a complete game, scattered nine hits and allowed three runs in the process. Donohue lasted eight innings until manager Jack Hendricks handed the ball to Ken Ash in the ninth. Cincinnati's center fielder Ethan Allen singled home Billy Zitzman in the bottom of the first inning to give the Reds an early 1-0 lead. The score would remain the same until the top of the sixth inning.

Chicago manufactured four runs in the top of the sixth. Charlie Grimm's single knocked in Kiki Cuyler and Rogers Hornsby. Tom Angley singled to score Riggs Stephenson. Finally, Root contributed the eventual game-winning hit when he singled to left field and sent Grimm across the plate. Cincinnati rallied in the home half of the eighth inning. With two on and nobody out, Hughie Critz double to right and drove home Pid Purdy. Curt Walker added a sacrifice fly that scored pinch runner Evar Swanson. The Cubs hung on to win, 4-3, and Root logged his first win of the campaign.

The Cincinnati Reds rallied late to beat the Chicago Cubs.

On Tuesday, April 30, the Cubs and Reds closed out the season's first month by saving most of the action for the final two innings. With the game scoreless in the bottom of the fourth inning, High Pockets Kelly tripled off of Sheriff Blake to start the frame then walked Chuck Dressen. With Hod Ford at bat, Blake's passed ball allowed Kelly to break the deadlock and give the Reds a 1-0 edge.

In the visitor's half of the eighth inning, Hornsby mashed a Jakie May pitch into deep right field. Hack Wilson answered with a triple then Stephenson singled Wilson home to give Chicago a 2-1 lead. Cincinnati regained the lead when Walker stepped to the plate. Walker doubled and scored Critz from first base, but a Woody English throwing error allowed Walker to round the bases. Cincinnati led, 3-2.

During the top of the ninth, Wilson doubled to right field tying the game when Clyde Beck stepped on the plate. May issued an intentional pass to Stephenson, but Grimm answered with a double that scored Wilson. In the home half of the ninth, Hendricks' substitutions proved successful. Purdy pinch-hit for Ford and drew a walk then Swanson entered as a pinch runner. Red Lucas hit for Johnny Gooch and singled. Joe Stripp batted for May and Pinky Pittenger took Lucas' spot on the bases. Stripp singled and plated Swanson. Critz hit a game-winning sacrifice fly that scored Pittenger and gave Cincinnati a 5-4 victory.

The Cincinnati Reds stormed back before settling for a 4-4 tie after 13 innings.

In the 1920s, teams traveled from city to city train. Before stadium lights and evening baseball, regular season games often ended in ties. That seems unbelievable in the era of social media. On Wednesday, May 1, that exact scenario happened when the Cubs and Reds were tied 4-4 after 13 innings. The Cubs could not maintain an early 4-0, third inning lead. Chicago pounced on Cincinnati's Dolf Luque. With one out, Cuyler tripled and scored Beck. Hornsby singled to drive home Cuyler. Finally, Wilson belted a two-run homer.

Cincinnati slowly chiseled away at Chicago's lead when they scored one in the fourth, one in the sixth and two in the ninth. Despite pitching into bases-loaded situations in the 12th and 13th innings, the Cubs and Reds ended without a victor. 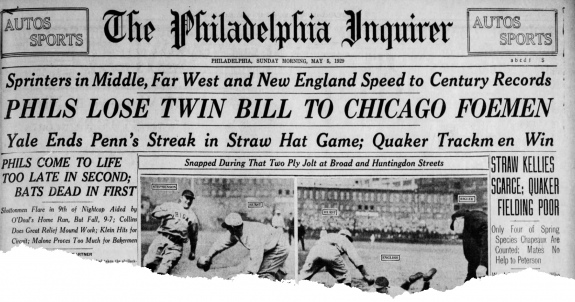 The Chicago Cubs throttled the Philadelphia Phillies after two days of weather-related rest.

Mother Nature provided two days of rest before the Cubs and Philadelphia Phillies finally played a doubleheader at the Baker Bowl on Wednesday, May 4. Chicago muscled out a 16-0 victory during the opener. Pat Malone pitched a complete-game shutout while the Cubs hammered Alex Ferguson, Ray Benge and Hal Elliott. Grimm finished the game 3-for-5 with four runs batted in. Malone was 3-for-5 with three RBI. Stephenson was 2-for-2 with three RBI. Hornsby, who finished 2-for-4, hit the game's only long ball.

During the second game, the Phillies finally broke through in the bottom of the first inning when Chuck Klein belted a two-run home run off of Root. Chicago continued its offensive onslaught by answering with six in the top of the second. Earl Grace's three-run homer proved the big blow of the inning. Hornsby, Wilson and Stephenson each plated runs during the inning. During the third inning, Cuyler hit a three-run blast off of pitcher Phil Collins to give the Cubs a 9-2 edge.

Philadelphia rallied late, but fell short. Lefty O'Doul and Pinky Whitney added a sacrifice fly and single respectively in the seventh to trim Chicago's lead to 9-4. In the bottom of the ninth, O'Doul belted a two-run homer making the score 9-6. With two outs, Phillies manager Burt Shotton sent Cy Williams to bat for Denny Sothern. Williams proceeded to single and score Don Hurst. Bernie Friberg grounded out to shortstop to end the game giving the Cubs a 9-7 win.

Both teams enjoyed an off day on Sunday, May 5.

And in non-baseball news... 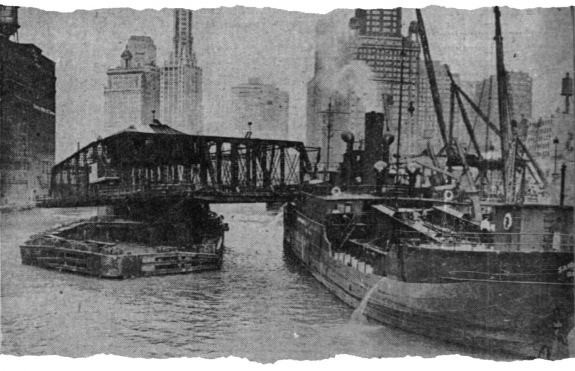 A sand boat traveling along the Chicago River struck the Clark Street bridge and dislodged the structure from its turntable. City of Chicago officials claimed they would need at least one month until repairs could be made.