With an 8-3 loss to the Washington Senators, the Chicago White Sox dropped their third consecutive game.

On Tuesday, May 5, the Washington Senators stepped into Comiskey Park for the first time during the 1959 campaign. The Senators grabbed an early lead and knocked the Chicago White Sox starting pitcher, Billy Pierce, out of the game after three innings and three runs. Washington's catcher Ed Fitz Gerald singled home Harmon Killebrew to take a 1-0 lead in the first inning. In the third, Jim Lemon slugged a two-run homer (with Killebrew on again) to extend Washington's lead to 3-0. Ron Samford, with one out in the top of the fifth, singled to score Lemon and increase the Senators' lead to 4-0.

The White Sox failed to generate any offense until the bottom of the fifth when Ron Jackson doubled to drive home the recently acquired Del Ennis. With Nellie Fox on first base, Sherm Lollar belted a two-run to trim Washington's lead to 4-3, but it was all Chicago could muster. Washington's Bob Allison added a solo homer in the seventh, Tex Clevenger and Reno Bertoia each drove in runs in the eighth, and finally Killebrew belted a solo shot in the ninth. Washington grabbed the series opener, 8-3

On Wednesday, the Senators and White Sox played before a paid audience of 1,710 fans. Chicago took a 3-2 lead into the top of the seventh inning. Washington's early runs came by way of two run-scoring doubles by Lemon. Chicago's starting pitcher, Early Wynn, worked into trouble in the top of the seventh frame. He managed to load the bases then surrendered a grand slam to Bob Allison that gave the Senators a 6-3 lead. Earl Torgeson's run-scoring double was too little, too late. The Senators hung on to win the game, 6-4, and sweep the two-game series.

Following a free day on Thursday, the White Sox continued their losing ways on Friday, May 8. Even worse, the loss would drop Chicago back to the .500-mark at 11-11. Before the game, the Cleveland Indians held the American League's top spot with a two-game lead over the second-place Baltimore Orioles. The White Sox sat in fourth place, three and half games out. 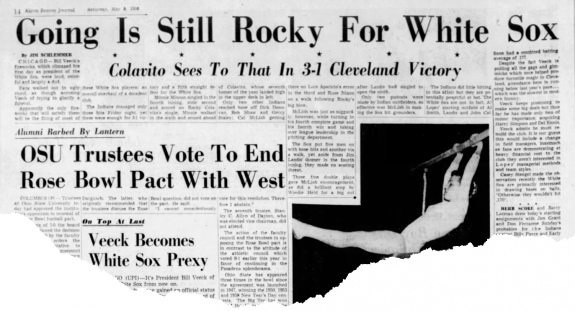 That Friday, the two teams hung zeroes on the scoreboard until the fourth inning. Cleveland's Rocky Colavito singled off of Dick Donovan to drive home Minnie Minoso. Jim Landis answered in the home half of the inning with a solo home run off of Cal McLish. Landis' blast was all the South Siders would manage. With Minoso standing on third, Colavito responded again with a two-run homer. The Indians scored all they needed and won, 3-1.

Despite the series-opening loss on Friday, Chicago would rise to the occasion and sweep the remaining three games. On Saturday, the White Sox scored early and often enough to maintain the lead. The South Siders plated three runs in the bottom of the second inning courtesy of a Luis Aparicio bases-loaded walk that scored Al Smith. Fox answered with a two-run single.

Vic Power and Minoso responded in the top of the third. Billy Martin scored when Power grounded into a double play. Minoso followed with a run-scoring single. Chicago maintained a 3-2 lead. Chicago charged back with five runs in the bottom of the third thanks to offense generated by Lollar, Torgeson, Bubba Phillips and Barry Latman. Chicago led, 8-2. 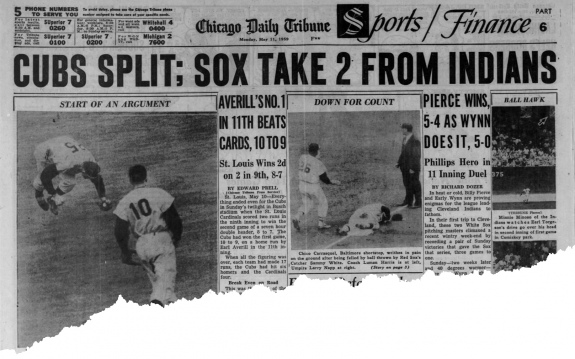 On Sunday, the Indians and White Sox locked horns for two games. During the first game, the two teams pushed a 3-3 tie into extra innings. Cleveland's Mudcat Grant pitched 7 2/3 innings, but Chicago's Billy Pierce would last all 11 innings. In the top of the 11th inning, Minoso singled and drove home Power. Chicago answered with two in the bottom of the frame. Billy Goodman single home Torgeson to even the score. Phillips' single proved the game winner when he drove home Harry Simpson. Chicago won, 5-4.