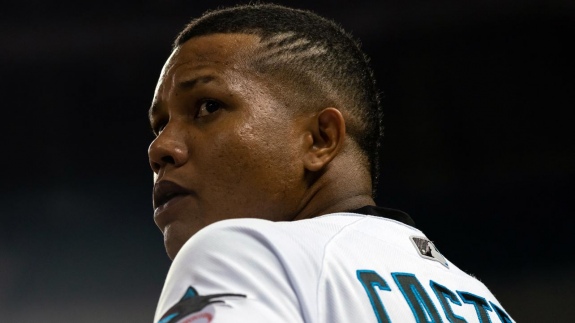 Miami Marlins second baseman Starlin Castro scans the field prior to a game against the Tampa Bay Rays on May 15.

Last year, the Chicago White Sox and Baltimore Orioles tried their damnedest to rip the title from the 1962 New York Mets. Both team failed, yet both teams concluded the season with triple digit losses. Ricky Renteria's White Sox finished 62-100 (.383) and did not wind up in the American League Central's cellar. The Kansas City Royals swooped in and lost 104 games. But Baltimore came within striking distance with a final record of 47-115 (.290). To further amplify how bad the franchise did that season, the Boston Red Sox won the AL East with a regular season record of 108-54 (.667). Even more importantly, they defeated the Los Angeles Dodgers in the World Series. Buck Showalter's Orioles finished 61 games behind the Red Sox. Brandon Hyde replaced Showalter in the Orioles dugout following the close of the 2018 campaign.

Entering action today, the Orioles (15-29, .341) are sitting in last place again. But the worst team in baseball the Miami Marlins (11-31, .262) is currently 13 games out of first in the National League East. New York Yankees legend, Derek Jeter, is now the chief executive officer of the Miami Marlins. During his playing days in The Bronx, Jeter won five World Series championships and had his uniform number retired. While his resume as a player is unquestioned, his moves at the helm of the Marlins are dubious. To date, Jeter's Marlins legacy is removing the psychedelic sculpture in center field and sending Giancarlo Stanton to the Yankees, Marcell Ozuna to the St. Louis Cardinals and Christian Yelich to the Milwaukee Brewers following the 2017 season. During 2017, those three players led the Marlins in WAR (wins above replacement): Stanton, 7.9; Ozuna, 6.1; and Yelich, 4.2. Yelich earned the National League's Most Valuable Player award with the 2018 Brewers.

Today, the Marlins are playing the Mets. With their current winning percentage, the Marlins are on pace for 120 losses. That would match the highest total since 1900. In 1962, the expansion Mets finished the regular season with a 40-120 (.250) record. During 2019, the Marlins' longest winning streak was two games. That occurred on two separate occasions. In mid-May, they strung together seven consecutive losses. They have even been shutout nine times during the current season.

Here are the 10 worst Major League Baseball seasons in terms of regular season losses since 1900: 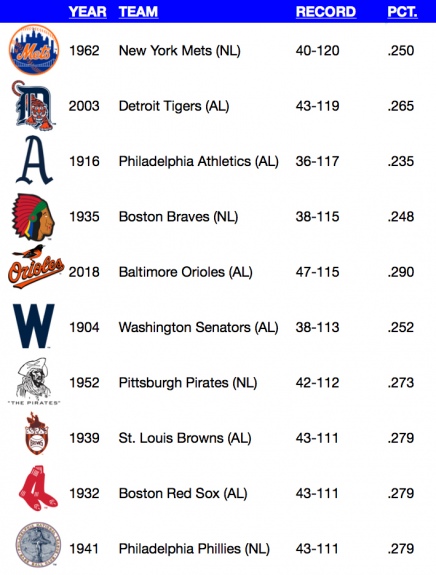