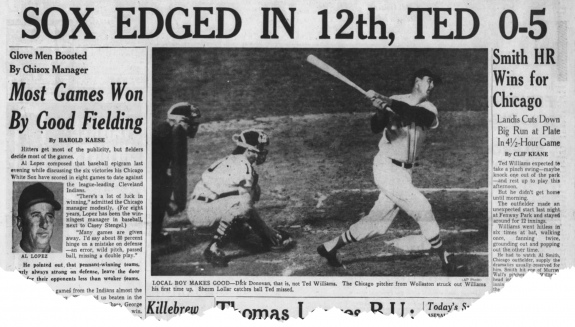 The Chicago White Sox wrapped up a four-game series against the Cleveland Indians by winning the final three games before traveling to Boston's Fenway Park. Beginning on May 12 and running through May 18, the White Sox won seven of eight road games against the Boston Red Sox, New York Yankees and Washington Senators. Entering this stretch of games, the White Sox sat in second place behind the Indians. But the mid-May stretch would allow the South Siders to reach first place in the American League, even if only by half a game.

On Tuesday, May 12, the White Sox made their first trip to Fenway Park in 1959. They needed extra innings to continue the winning streak that began in Cleveland. Rudy Arias picked up the win relief while Murray Wall was tagged with the loss. White Sox pitcher, Dick Donovan, hammered a two-run homer off of Red Sox starter Ike Delock. Boston answered with a run in the home half of the inning, and then they tied the game with a bases-loaded walk to Jackie Jensen. Al Smith gave Chicago a two-run lead when he belted a homer in the 12th inning that also sent Earl Torgeson home. Jensen did his best to tie the game again with a solo blast in the bottom of the inning. Chicago hung on to win, 4-3.

The following day, on May 13, Bob Shaw pitched a five-hit complete-game shutout. Chicago had all the runs they needed by the fourth inning to extend their winning streak. Del Ennis and Torgeson each added run-scoring singles to give the White Sox an early 2-0 lead in the top of the first inning. Smith plated another run with a third-inning double and then Sherm Lollar achieved the same feat in the top of the fourth. The White Sox beat the Red Sox, 4-0.

Boston did not stand a chance during the third and final game of the series. Chicago scored three in the first and one in the third. During the fourth through seventh innings, the White Sox scored two runs in each frame. They continued to add offense with single runs in the eighth and ninth innings. Torgeson, Ennis and Jim Landis each homered. Despite scoring 14 runs, the White Sox had to hold off a late Boston rally. Frank Malzone hit a sacrifice fly that scored Pete Runnels in the sixth inning. Don Buddin hit a seventh-inning solo blast off of Early Wynn to continue cutting into the lead, and then he added a two-run double in the eighth. Marty Keough singled home Sammy White and Buddin. Chicago completed the three-game sweep by beating the Red Sox, 14-6.

The White Sox began the weekend by traveling to New York's Yankee Stadium. Billy Pierce outdueled Whitey Ford giving Chicago a 6-0 win. Lollar gave the South Siders an early 1-0 lead when he grounded out to Bobby Richardson, but Luis Aparicio scored. Ford kept the game close until the sixth inning when Torgeson and Bubba Phillips drove in one and two runs respectively. For good measure, Aparicio padded the lead by knocking home two runs. The White Sox continued their winning ways with a 6-0 victory over the Yankees.

On May 16, the Sox closed out a brief two-game series at Yankee Stadium with a 4-3 extra-innings win. Chicago grabbed a 2-0 lead courtesy of Landis' third-inning sacrifice fly and an Aparicio RBI single in the fourth inning. Norm Siebern plated Yogi Berra on a sacrifice fly in the fourth inning. Tony Kubek and Mickey Mantle looked to end Chicago's winning streak, now at seven games. Kubek tripled home Jerry Lumpe and Mantle doubled home Kubek. Lollar tied the game in the ninth when he singled home Nellie Fox. In the top of the 11th inning, Ennis hit the game-winning single with runners on first and second. Fox scored on the hit. Turk Lown closed out the home half of the inning and gave Chicago a two-game sweep over the Bronx Bombers and extended the winning streak to eight games.

After traveling to Washington's Griffith Stadium, the Senators snapped the White Sox string of wins by beating them 4-2 during the first game of a doubleheader on Sunday, May 17. Jim Lemon and Reno Bertoia each homered in the bottom of the second inning giving Washington a 3-1 lead. Harmon Killebrew scored on Gerry Staley's wild pitch to Roy Sievers. Aparicio scored on a Pedro Ramos wild pitch in the top of the eighth. The Washington Senators won, 4-2.

During the nightcap, the White Sox started another winning streak. Chicago defeated Washington, 10-7. The South Siders took an 8-3 lead into the bottom of the eighth inning. The Senators rallied by scoring four runs courtesy of a Julio Becquer triple, an Albie Pearson single and a Killebrew two-run homer. The White Sox added two insurance runs in the top of the ninth.

On Monday, May 18, Chicago jumped on Washington for a 9-2 win. Early Wynn pushed the White Sox into first place by pitching a complete-game and earning the win. Lollar and Smith added home runs. Earl Torgeson set the pace by going 3-for-4 and knocking in two.

And in non-baseball news. 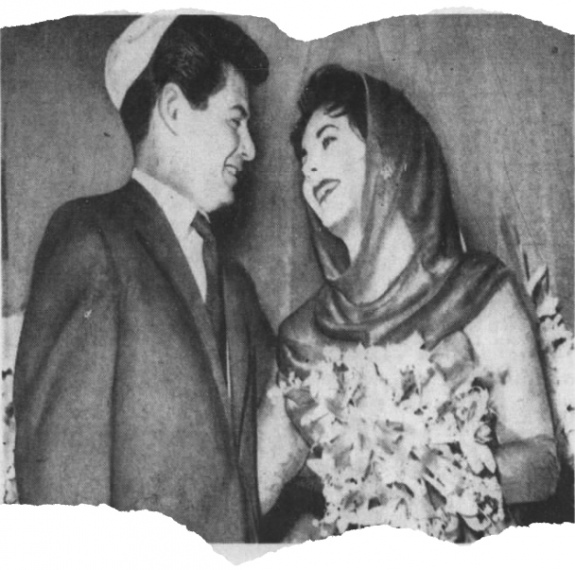 On May 12, singer Eddie Fisher and actress Liz Taylor were married at a synagogue in Las Vegas, Nevada.