As the Chicago Cubs closed out May and welcomed June, the team hit the skids. Between May 27 and June 2, the North Siders dropped five and won only one game. At the start of the week, the Cubs sat atop the National League with a one-game lead over the St. Louis Cardinals. The Pittsburgh Pirates trailed by a game and a half. By the end of the week, the Cubs would fall to third place by two and half games.

On Monday, the Cubs concluded their brief two-game set against the Cincinnati Reds at Redland Field. Following the opening game win on Sunday, the Cubs fell short, 8-5. The Cubs scored two runs in the top of the opening frame and lead as late as the top of the eighth inning. With a 3-2 lead heading into the home half of the eighth, the Cubs surrendered six runs. Cincinnati's Hughie Critz was 4-for-4 at the plate, but High Pockets Kelly was 2-for-4 with three runs batted in. Tuesday's game was washed away and eventually rescheduled for August 25 as the second game of a doubleheader.

Pittsburgh's Steve Swetonic earned his third win of the season after pitching seven and two-thirds innings.

Next it was off to Pittsburgh's Forbes Field for three games. Pirates pitchers Steve Swetonic and Carmen Hill combined to allow 11 hits, but only two runs. Pie Traynor's three RBI set the pace as the Pirates jumped on the Cubs early and often. Kiki Cuyler, Rogers Hornsby and Hack Wilson provided the limited offense during the afternoon. Cuyler and Hornsby both finished 3-for-4, but Hornsby and Wilson drove in Chicago's only two runs. Pittsburgh claimed the series opener, 7-2.

Following the doubleheader against the Chicago Cubs, the Pittsburgh Pirates were in a virtual tie atop the National League with the St. Louis Cardinals.

The Cubs and Pirates played a twin bill on Thursday, May 30. Chicago won the first game, 5-1. Art Nehf pitched eight innings of one-run ball for the North Siders. Manager Joe McCarthy handed the ball to Guy Bush for the ninth. Bush delivered a scoreless frame. Wilson provided the damage as he batted 3-for-4 with three RBI. Pittsburgh claimed the second game, 4-0. Charlie Root and Burleigh Grimes both pitched complete games. The game was scoreless until the bottom of the eighth inning. With Lloyd Waner on third base, his brother Paul hit an inside-the-park home run. Earl Sheely added a run-scoring sacrifice fly and Charlie Hargreaves added a single and an insurance run. 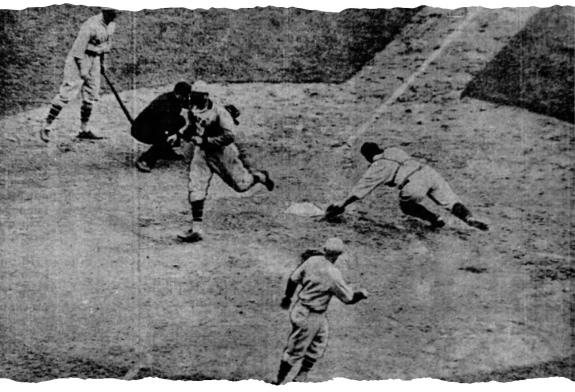 On May 31, the Cubs traveled back to Chicago's Wrigley Field. The North Siders opened June with a homestand against the New York Giants. On Saturday, the Giants grabbed an early 1-0 lead, but the Cubs took a 4-3 lead into the top of the sixth inning. While play-by-play data is not available for that game, the Giants scored three unearned runs during that inning. The visitors would score once more in the eighth to claim a 7-4 win.

The Cubs continued their losing ways on Sunday, and once again, it fell apart late. The game was scoreless heading into the seventh inning. In the top of the seventh, New York plated four runs. Pat Crawford, Travis Jackson, Freddy Leach and Edd Roush all notched RBI singles off of starting pitcher Sheriff Blake. That was enough offense for the win. Chicago's Norm McMillan added a solo home run in the bottom of the ninth, but it was too little and way too late.