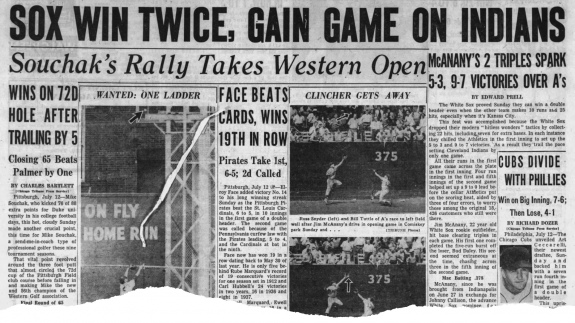 What a crazy three-week stretch at work. We won a lot of high-profile projects, so back to the 1959 baseball retrospective.

Following a day off on June 15, the White Sox traveled to New York for three games against the Yankees. The South Siders dropped all three games at Yankee Stadium. Billy Pierce, Ray Moore and Gerry Stanley were tagged with the three losses. Despite winning the first two games easily (5-1, 7-3), the Yankees needed 10 innings to win the final game. Mickey Mantle clubbed a solo blast off of Stanley to give the Bronx Bombers a 5-4 victory.

The White Sox continued their losing ways on June 20 at Boston's Fenway Park. Mother Nature intervened on the 19th forcing a doubleheader the following day. Early Wynn was tagged with the loss during the 8-2 series opener. Dick Donovan earned the loss during the second game. Chicago was blanked, 9-0. Pierce ended the losing streak on June 21 to avoid a second consecutive sweep. The White Sox hurler lasted all nine innings allowing only two runs.

Chicago's South Siders returned to Comiskey Park following an off day on June 22. The White Sox took two of three against the Washington Senators. Wynn logged his 10th win of the season after pitching a complete game and allowing one run. Wynn's lone mistake was a solo home run by Bob Allison. On Wednesday, June 24, the Donovan pitched a complete game in a losing effort. Chicago held a 2-1 lead heading into the to of the ninth inning. Donovan allowed three runs to cross the plate in the visitor's half of the frame. The Senators evened the series. After falling behind 1-0 during the series finale, the Sox rallied for four runs to give Barry Latman his first win of the campaign. The White Sox won, 4-1.

After the Senators departed Comiskey Park, the Yankees arrived in town. The Bronx Bombers doubled up Chicago to win the opener, 8-4. Pierce's record dropped to 8-8 following the loss. Chicago won the final three games of the series (5-4, 9-2, 4-2). On June 27, the Sox rallied late to give Bob Shaw his sixth win of the year. The South Siders plated four runs in the bottom of the eighth courtesy of Harry Simpson's grand slam off of Bob Turley. On June 28, the White Sox swept both halves of the doubleheader. Wynn pitched another complete during the first game, and Donovan pitched 8 1/3 innings in the second game before handing the ball to Turk Lown to close things down.

June 29 brought another day of rest before heading to Cleveland for two games. Chicago lost the final game of June at Cleveland Stadium, 3-1. With the loss Pierce's record dropped to 8-9. But on July 1, the White Sox evened the series with a 6-5 victory. Latman picked up his second win and Earl Torgeson belted his seventh home run of the season.

On July 2 and 3, the White Sox and Tigers split two games. Detroit claimed the opener, 9-7. Don Mossi earned his seventh win while Bob Shaw dropped his third. Chicago needed 1o innings in the series finale, but they claimed a win for Lown. Al Smith tagged Tom Morgan a solo shot that proved to be the game winner.

To celebrate the Fourth of July, the White Sox split a doubleheader with the Athletics in Kansas City. Chicago won the opener, 7-4. John Romano, Bubba Phillips and Sherm Lollar all homered. Kansas City jumped on Pierce and defeated the White Sox, 8-3. The South Siders claimed the series victory with a 4-3, 10-inning victory on July 5. Nellie Fox hit what proved to be the game-winning single off of Ned Garver in the top of the 10th frame.

The first of two All-Star Games that season was sandwiched between off days on July 6 and 8. The National League defeated the American League 5-4 at Pittsburgh's Forbes Field. Three White Sox started that game for the Junior Circuit: Fox (2B), Luis Aparicio (SS) and Wynn (SP).

When play resumed after the first All-Star Game, the Indians returned to Comiskey Park. The two teams split the two-game series. Chicago claimed the first game, 4-3, on July 9. The following day, Cleveland grabbed game two by doubling-up the Sox, 8-4. Pierce won the first game while Wynn suffered his sixth loss during the finale.

On July 11 and 12, the White Sox swept all three games against the Athletics. Latman earned his third win with a complete-game performance. The next day, Chicago took both halves of the doubleheader. Moore earned his second win during the opener, 5-3 win. Shaw earned his eighth win in the second game. The Sox enjoyed an off day on July 13.