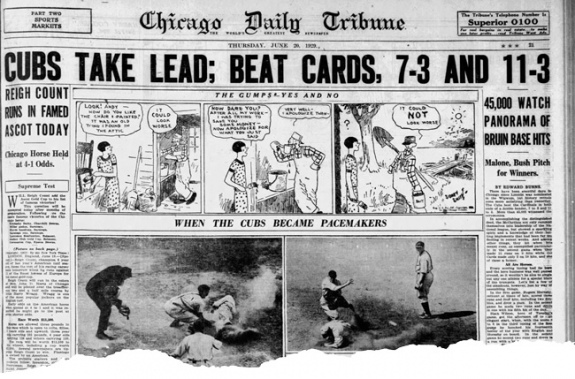 Beginning on June 17, the Cubs hosted five against the Cardinals at Wrigley Field. The Cardinals jumped on Charlie Root and hammered the Cubs, 13-3 in the series opener. But, the following day, the Cubs returned the favor with a 13-6 win. Hack Wilson belted two home runs during the game. On June 19, the Cubs claimed both halves of the doubleheader (7-3, 11-3). Pat Malone earned his 10th win of the season during the first game, and then Guy Bush earned his seventh win during game two. The Cubs closed out the series with a 7-6 win on June 20. Art Nehf outdueled Pete Alexander to earn his fifth win. With the win, the Cubs found themselves atop the National League standing by only half a game over the Pirates. The Cardinals had fallen two games off the pace and into third place.

As the Cardinals left Wrigley Field, the Pirates moved in. After taking four of five against the Cardinals, the Cubs would drop three of four to the Pirates. On June 21, the Pirates plated four runs in the top of the first, and then piled on late with four in the seventh, two in the eighth and four more in the ninth. Burleigh Grimes outdueled Mike Cvengros as the Pirates won, 14-3. The Pirates won the next two games, 7-4 and 8-7. Sheriff Blake was tagged with the loss on June 22, and then Art Nehf took the loss on June 23. On June 24, the Cubs returned to their winning ways with a 4-3 victory. Root pitched a complete game and allowed only three runs.

The Cubs enjoyed two days off before opening a five-game series at St. Louis' Sportsman's Park. Chicago rattled off wins in the first four games of the series. They won 5-4 on June 27 as Guy Bush improved his record to 8-1. Rogers Hornsby was 3-for-4 with a solo home run. When the Cubs plated seven runs during the second inning on June 28, they generated all of the offense they needed. The Cubs defeated the Cardinals, 9-5. Malone won his 11th game and homered. Wilson and Hornsby also contributed long balls. On June 29, the Cubs scored all 10 of their runs in the first four innings. Hornsby and Charlie Grimm both homered. Blake earned his fourth win of the season. St. Louis made things interesting on the final day of June. At the close of the third inning, the Cardinals held an 8-1 lead. Chicago answered with 13 runs between the fourth and eighth innings. Hal Carlson earned his second win of the season as the Cubs defeated the Cardinals, 14-8. The two teams welcomed July with an 11-11 stalemate after six innings. Riggs Stephenson finished the game 3-for-4 with seven runs batted in. He belted a grand slam and a three-run homer.

Following the series in St. Louis, the Cubs returned to Wrigley Field for brief four-game home stand against the Reds. On July 2, the Cubs needed 11 innings to complete the 5-4 win. Bush logged his ninth win. Wilson was 3-for-5 with two RBI. The following day, the Cubs outlasted Cincinnati winning the game, 7-5. Bush, who pitched in relief the day before, pitched all nine innings on July 3. First baseman Grimm was 3-for-4 with four RBI. The two teams celebrated the Fourth of July by splitting a twin bill. The Cubs lost the opener, 9-8, in an eight-inning affair. Carlson was tagged with his second loss of the season. Hornsby hit his 15th home run of the season. Chicago doubled up Cincinnati, 10-5, in the second game. After trailing 4-0 heading into the bottom of the third, Chicago answered with six runs in the home half of the frame. Blake picked up his fifth win by pitching a complete game. Kiki Cuyler hit his eighth home run of the season.

The Cubs enjoyed a day of travel on July 5 as they headed to Boston for four games against the Braves at Braves Field. Boston would win the first and final games of the series while Chicago claimed games two and three. On July 6, Boston's Sock Siebold outdueled Nehf as the Braves won, 3-1. Chicago responded loudly on July 7 with a 15-4 win. Root logged his eighth win as Hornsby and Norm McMillan homered. Catcher Mike Gonzalez was 3-for-4 with three RBI. Woody English contributed three RBI of his own. On July 8, the Cubs nearly responded with as much offense as they defeated the Braves 11-3. McMillan and Cliff Heathcote were both 3-for-5 with an RBI each. Boston closed out the series by scoring five runs in the bottom of the third. Braves pitcher Ben Cantwell pitched a complete game and allowed only two runs. Boston won, 6-2.

Chicago traveled to New York for five games against the Giants at the Polo Grounds. The Cubs would win three of the five games. On July 10, Bush earned his 11th win as the Cubs defeated the Giants, 6-2. Wilson belted his 20th homer of the season. The two teams split a doubleheader of July 11. Chicago scored all eight runs during the first six innings before New York plated three. Malone earned his 12th win of the season. McMillan hit his third home run of the season. New York outslugged the Cubs in the second game, 16-12. Blake was tagged with his 10th loss of the season. A home run by English and two by Wilson were not enough for victory. New York's Freddie Lindstrom hit his 12th and Mel Ott clubbed his 25th. On July 12, the Giants needed 10 innings to beat the Cubs, 4-3. Malone dropped his fifth game. Chicago briefly held a 3-2 lead heading into the bottom of the ninth. Ott tripled off of Malone in the ninth to score Lindstrom and tie the game. Travis Jackson hit a solo game-winning homer in the bottom of the 10th to give the Giants the win. The Cubs closed the series by blanking the Giants, 4-0. Carlson picked up the win by pitching a complete-game shutout. Stephenson and Hornsby each homered. The Cubs enjoyed an off day on July 14.