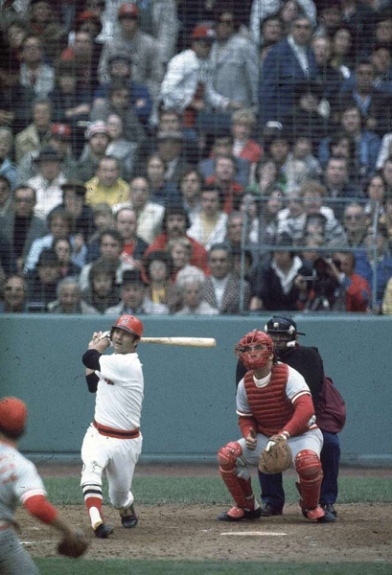 "Carl Yastrzemski arrived at Massachusetts General Hospital on Monday after experiencing chest discomfort. After numerous tests and evaluations, it was determined that he needed triple bypass surgery which was performed this afternoon. The surgery was a complete success and he is resting comfortably. We are most grateful for all of the prayers and support we have received."

Despite growing up in the Chicago suburbs, my Mom always claimed Yastrzemski was her favorite baseball player. Besides being a excellent ballplayer, she enjoyed that Yaz's last name was just as difficult to spell as her maiden name.

At the White Sox game last night, my aunt asked how my Mom was holding up with the news of Yaz. My Mom emailed me at work first thing in the morning. The message was simple, "Yaz pulled through. Have a good day."

Carl Yastrzemski was the last Major League player to win the Triple Crown. In 1967, he led the American League with a .326 batting average, 44 home runs, and 121 RBI.

Hope he has a quick recovery!

dannie   Thursday, August 21, 2008
Yaz played his AA year, with the Raleigh Caps (for Raleigh Capitals, since Raleigh is the capital of North Carolina) of the old Carolina League. The stadium was almost in downtown and it is now a place where the city parks their garbage trucks. The Wilson Tobs had the first $100,000 Bonus Baby (Dave Nicholson) but he never panned out. In the forties and fifties, North Carolina Organized Baseball Teams at various levels of competition.