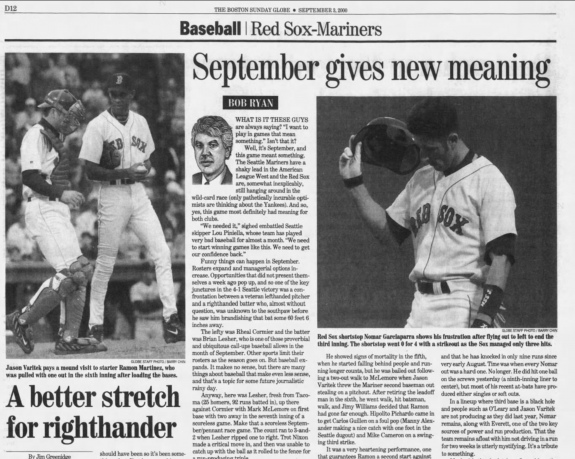 When I registered for this trip, the stop I was most excited about was Boston's Fenway Park. In fact, it was the primary reason for this trip. At the time, there was talk surrounding the possible demolition of the park. Apparently, rumors circulated that Boston Red Sox management could not be competitive without a bigger ballpark. The Red Sox had plans to build a larger replica of Fenway Park across the street that would allow for increased seating capacity. In Chicago, we lost Comiskey Park after the 1990 season. I needed to get to Boston before the home of Ted Williams and Carl Yastrzemski met a similar fate.

We loaded our luggage on the bus, left Connecticut, and watched a documentary on the Red Sox. The film detailed Ted Williams, the last player to bat over .400 for the duration of a season, Yaz and the "Impossible Dream" 1967 season, and Carlton Fisk's legendary World Series home run. I remember approaching the ballpark and seeing the large Citgo sign. If you've ever watched a Red Sox home game on television, the Citgo sign appears as if it's just beyond the Green Monster. In reality, it's located across the Massachusetts Turnpike. Even though we were close to Fenway Park, we had to make one detour first.

Our brief detour brought us to Northeastern University. Jay hopped off the bus lead us around the corner to a statue on a secluded area of campus. This was the site of the first World Series game. Before the Red Sox played at Fenway Park, they called Huntington Avenue Grounds home. The Red Sox were called the Americans back then, and they played the Pittsburgh Pirates in the 1903 World Series. The statue was of Cy Young standing on the mound, about to deliver a pitch. Off to the game.

As we approached the ballpark, the skies looked ominous. Jay informed us that rain was in the forecast. Buckets of rain, too. The game was scheduled to start at 1:15 ET, but it appeared unlikely that the first pitch would happen on time or at all. Since the skies opened the moment we stepped off the bus, a few of us opted to hit Burger King and hang out for a while. As soon as I stepped up to the register, I knew I was in Boston.

"Goin' to the pak today to see the Sox?" the employee asked.

After a light lunch, I decided to brave the rain and head over to the ballpark to take in the experience. I circled the ballpark and grabbed a few photos. I walked through the team shops along Yawkey Way, then entered the park. There I was, standing inside Fenway Park. It was, and remains, the oldest active baseball park (built in 1912) in use. It's two years older than Wrigley Field. When Comiskey Park (built in 1910) was demolished, the title was passed to Boston.

For the next two and a half hours, the rains would start and stop. For a moment, I didn't think we'd see any baseball in Boston. But after a while, the clouds cleared, the tarp was removed, and they played. The group of guys from Seattle were ecstatic. This was the game they signed up to see. The Seattle Mariners beat the Red Sox, 4-1.

I loved Fenway Park. We sat in old wooden seats in the grandstand. The park was small and intimate, yet not crowded. My only disappointment was learning that the legendary Green Monster, the tall and wide left field wall, was a hard plastic. For some reason, I always imagined that it was constructed of heavy wood that was coated with green paint every year. What a wonderful baseball park. I uploaded photos of my 2000 trip into a separate album. I also uploaded shots from my 2010 visit.

Eventually, a deal was reached to restore Fenway Park assuring Bostonians that Red Sox baseball will remain in Fenway Park for generations. Ten years after my original visit to Fenway Park, I had the chance to return. The team made so many improvements during that span. I'm glad I had the opportunity to make a return trip.

After the game, we packed up and headed for the Crowne Plaza in Worcester, Massachusetts. Our next stop would be a day at the National Baseball Hall of Fame and Museum in a little town in upstate New York.

Next stop: The Baseball Hall of Fame and Museum