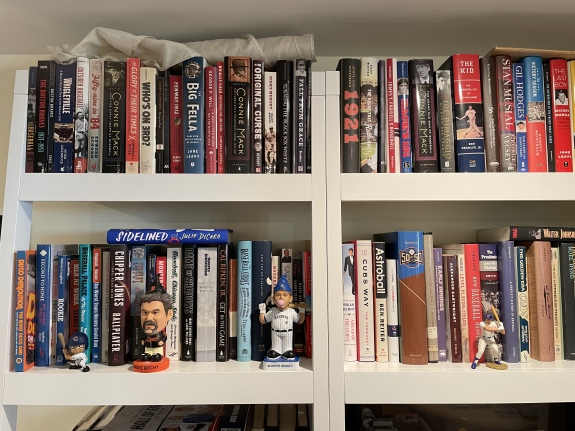 Just a portion of my baseball book collection that displays books that fall into both read and unread categories.

This morning's Facebook Memories reminded me that I finished reading Jim Bouton's controversial and groundbreaking book, Ball Four, 11 years ago. An odd coincidence, but that marked the 41st anniversary of the first and only home opener in Seattle Pilots history. If you're unfamiliar with the connection, I'd recommend you read Ball Four. While not a SABR member at that point, I was determined to expand my baseball knowledge beyond the limits of Chicago Cubs and White Sox history. I was also less than one month away from completing my goal of seeing every MLB franchise play at home. The final team on my list? The Philadelphia Phillies.

At the same time, Borders was closing its doors. Every Friday at lunch, I would stop by the nearest location and clean out its baseball section. Each week, the prices on all books and music would drop an additional 10%. As a result, my modest baseball book collection transformed into a substantial library. That led to devouring books about every team and every era of the game. That also led to a significant backlog. For every book I finished, I bought roughly four or five more. Guilty as charged.

While there is nothing good about the COVID-19 pandemic, one of the benefits to our work-from-home environment has been tackling this backlog. Not only am I reading more and at a faster rate, but I organized this collection. From the onset, there were multiple ways to arrange these books. Some typical, others not. By team? Some books aren't focused on just one team. Alphabetical by author? Yawn. I even perused Pinterest for ideas, and honestly, I considered arranging them by book color. Perhaps it would create a nice visual, but I decided that might be too difficult to find while working on a SABR research project. It dawned on me that there really wasn't a wrong way to tackle this project.

Hold up. Except for people who flip their books backward to display the beige pages. I'm not sure those individuals even like reading. Even generic living room displays at Crate & Barrel have fake copies of Moby Dick, Don Quixote, Pride & Prejudice, and the latest by Jodi Picoult. But I digress. 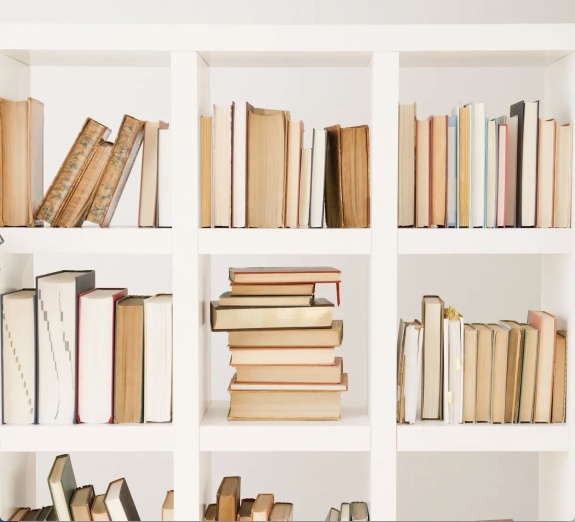 Really?! Who does this?

After mulling over the options, I decided to divide my library into two sections: books I've read, and books I haven't and then organized chronologically. Not by date of publication, but rather by the date of the book's subject matter. While simple in theory, this proved more complicated than I imagined.

Books like, 1921: The Yankees, the Giants, and the Battle for Baseball Supremacy, or 1954: The Year Willie Mays and the First Generation of Black Superstars Changed Major League Baseball Forever, are obvious. Same thing with, The Cubs Way: The Zen of Building the Best Team in Baseball and Breaking the Curse, and Astroball: The New Way to Win it All. Those books highlight the processes required to win two consecutive championships, but ultimately, they pertain to the 2016 and 2017 World Series respectively. Those all fit perfectly into a chronological timeline.

Player biographies should be easy, right? Birth date or MLB debut? The Cubs legend Ernie Banks was born in 1931 and reached the major leagues in 1953. Players reach MLB franchises at all ages. Some older, some very young. I think they fit the timeline better according to when they broke into the majors. Seems like they will fit better with their contemporaries employing that method.

Connie Mack, the iconic manager and owner of the Philadelphia Athletics, proved problematic. As a player, Mack was insignificant. But his influential role as an owner and manager spanned more than five decades. Esteemed author Norman Macht wrote the definitive three-part biography (more than 2,100 pages) of the Tall Tactician. Should all three books sit together as one masterwork? Since each volume covers a substantial period of time, I opted to separate them and slot each in the timeline accordingly.

Recently, I finished The Glory of Their Times: The Story of the Early Days of Baseball Told by the Men Who Played It. It's arguably the greatest baseball book ever written, but where does it fit? Covering the "early days of baseball" didn't help. Should I file the book in the 1960s? The author conducted the interviews and originally published the book in that decade. To further complicate the situation, the players' careers did not necessarily overlap. Tommy Leach had the earliest start to his career with the 1898 Louisville Colonels (yes, that was once a National League franchise), so that's where it appears on my bookshelf.

Finally, there are general baseball books that tackle multiple topics, or tell stories from numerous eras. Sports Illustrated's Great Baseball Writing (1991), The Greatest Baseball Stories Ever Told: Thirty Unforgettable Tales from the Diamond (2001), Brian Kenny's Ahead of the Curve (2016), and SABR 50 at 50: The Society for American Baseball Research's Fifty Most Essential Contributions to the Game (2020), are all arranged by date of publication. NOTE: A friendly reminder. Please check out SABR's Digital Library.

What's fun about this method of organization is that my bookshelf will always be evolving. As I purchase new books and read the, the look of the collection will be in constant flux. The only challenge is adding more shelves.