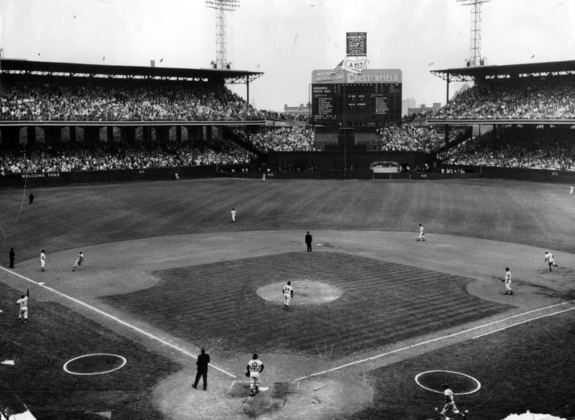 Duke Snider hits a home run into the stands in left center field, as the Dodger outfielder rounds first base, and his teammate, Wally Moon, crosses third on his way to the plate in Comiskey Park on Oct. 8, 1959. (Photo: Chicago Tribune)

Major League Baseball's 2021 postseason is in full swing. The National League and American League wild card games are in the books, and three of the four League Division Series are tied at one game apiece. Tonight, the Houston Astros have an opportunity to sweep the Chicago White Sox in their best-of-five series.

Due to the New York Yankees' and St. Louis Cardinals' rich and storied World Series histories, I opted to wait for this post until their wild card status was settled. The Boston Red Sox eliminated the Yankees, 6-2, at Fenway Park on October 5. With that win, that erased many potential World Series rematches. The Los Angeles Dodgers defeated the Cardinals, 3-1, at Dodger Stadium on October 6.

This year's postseason contenders offer an interesting mixed of legendary teams with long histories and relatively new franchises. We even have two teams that switched leagues. Looking ahead at the possible World Series combinations, there are only a few rematches that we've seen before Here is a list of the teams to reach the postseason (I am not including teams that have been eliminated as of October 10):

Here are the World Series matchups we've seen before: