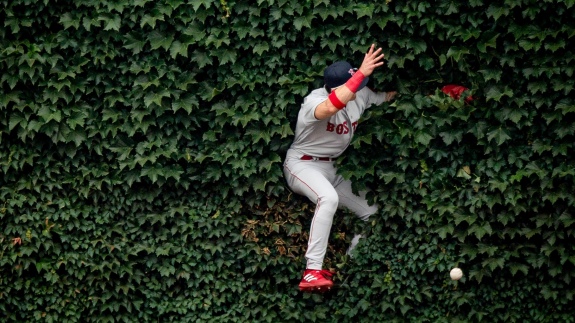 The Boston Red Sox dropped the first two games of the holiday weekend series against the Chicago Cubs at Wrigley Field.

As a kid, long before the days of interleague play, I wanted to see the Chicago Cubs and Boston Red Sox play. Both teams played in historic ballparks. Today they play in the two oldest active parks. Back in those days, this matchup was only possible in World Series play. That era was long before both teams ended legendary title droughts.

This afternoon, I finally get to fulfill this dream. Not quite a World Series-caliber game, but something I can cross off of my baseball list. The Red Sox (43-35, .551), despite having a winning record, sit in third place in the American League East. The New York Yankees (58-21, .734) hold a 14 -game lead over Boston. It's too early to place much weight on wild card standings, but if the season ended today, the Red Sox would make the playoffs.

The Cubs (32-46, .410) are a team in disarray. Sitting in third place in the National League Central, they trail the Milwaukee Brewers (45-35, .563) by a dozen games. Oddly enough, the Cubs are in position to sweep the series having won on Friday afternoon and Saturday night.

Boston will attempt to salvage the final game of the series by sending 26-year-old Connor Seabold (0-1, 13.50 ERA) to the mound. This will be his third MLB start. His last appearance came on June 27, against the Toronto Blue Jays.

The Cubs will counter with Keegan Thompson (7-3, 3.34 ERA). The 27-year-old was tagged with the loss during his appearance on June 28 against the Cincinnati Reds.