How surreal. Carlos Zambrano took the mound for the Chicago Cubs against the Houston Astros in Milwaukee's Miller Park, home of the Brewers, in front of over 22,000 Cubs fans to throw a no-hitter.

Last season, I saw Zambrano take a no-hitter into the ninth inning against the San Diego Padres at Wrigley Field. I had front row seats courtesy of Padres management. Long story. That game was probably better known for the fight between Derrek Lee and Padres starting pitcher Chris Young.

As you've read on some of my older blogs, my favorite radio program is Boers and Bernstein on The Score. For years, Kerry Wood and Mark Prior were the Cubs' two aces. Boers and Bernstein said that even though Wood and Prior both had electric stuff (how's that for a vague baseball term), Zambrano was the mostly likely to throw a no-hitter.

With the victory over the Astros, and the Phillies' doubleheader sweep of the Brewers, the Cubs' Magic Number is down to 7. 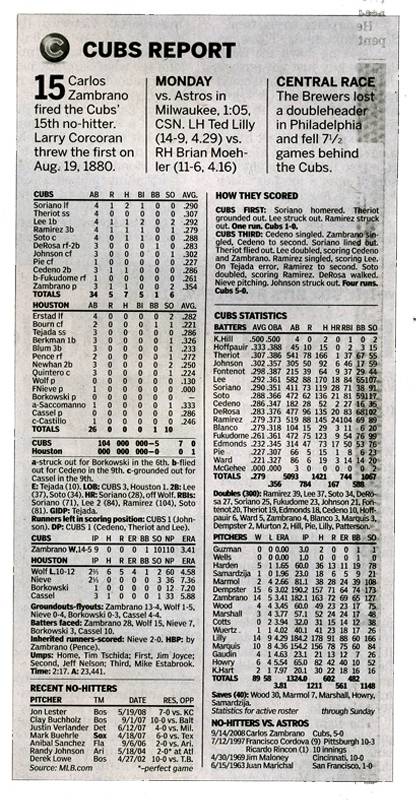 A year for Cubby history no doubt about it.
GO CUBS GO!

All we need now is a World Series Champions pennant flying at Wrigley Field. I'm tired of falling flat in the playoffs. Anything less than a World Series title will be a disappointment this year.

Like we need one more reason to hate Zambrano here in Milwaukee. He's a Milwaukee killer, ten times over.

P.S. That was also the 1st no hitter at Miller Park and the Brewers weren't even involved.

I was thinking about that afterward. The first no-hitter in Miller Park history and the Brewers were in Philadelphia. Go figure.