Change Comes Slow on the North Side

I hate to generalize and perpetuate stereotypes, but as a whole, Chicago Cubs fans are slow to adapt to change. As a fan base, we cling to mediocre players far too long believing that they'll still be the next Ernie Banks or Andre Dawson. We hate to see changes made to Wrigley Field, though it desperately needs a significant facelift. Quickly too. We didn't even install lights until 1988. That's more than 40 years after the last team, the Detroit Tigers, to install them. Fans insisted that night baseball should never be played at Wrigley Field. Seeing day baseball never got us anywhere, I was all in favor of lights. Even the team's home uniform never changes, and when it does, it's only a mild tweak. But I'll admit, their road jerseys have evolved.

Back in 1997, I started to prepare a proposal to Cubs management with a new home uniform concept. I've always enjoyed the layered jersey look. Basically, this style consists of a darker shirt below a lighter, sleeveless jersey. Think about the Pittsburgh Pirates uniforms from the 1960s. In those days, baseball was trapped in the wake of the players strike of 1994 that cancelled the final two months of the regular season and no playoffs or World Series were played. Some fans still swore they wouldn't return to Major League Baseball games. I decided it was time to re-ignite the Chicago fan base.

Here's the concept I developed. 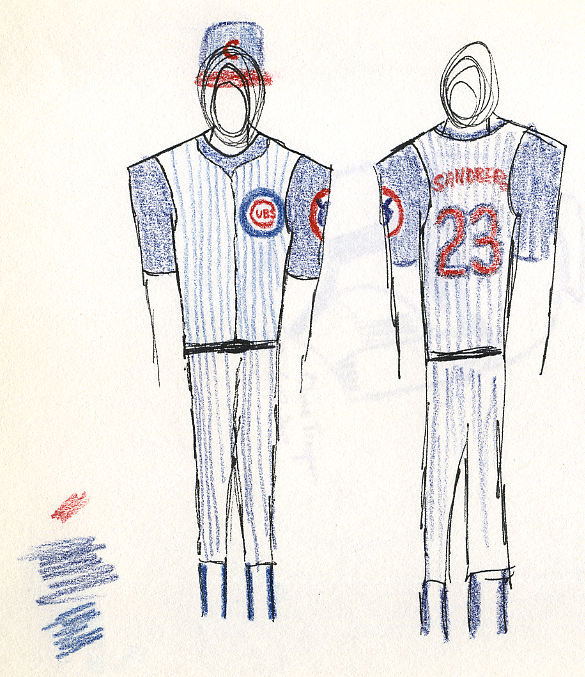 I decided that the home white jersey with blue pinstripes would remain, but this time it would be lighter, sleeveless and button-up. The team logo would remain on the right chest. On the back, the player's name and number would appear in red with blue outlines.

For pants, they would keep the white with blue pinstripes and wear them with a belt. The days off elastic pants were long gone even back then. I was still a fan of the classic blue stirrups.

To top it all off, I decided to adopt the team's road cap as the primary cap for use at home or on the road. It features the classic red "C" on blue with a red bill.

For some reason during the season, I decided not to follow through with this. Looking back, I'm not sure what stopped me. Perhaps it was the team's 0-13 start to the season.

Did you get a response to your proposal?

I never submitted it to the Cubs, but a few friends and coworkers liked the idea.

Wonder what would have happened if you had??

I'm like you with the blue stirrups, I like them. When I grew up that's all ball players wore were the stirrups, not the newer pants that have the end down by the shoes.