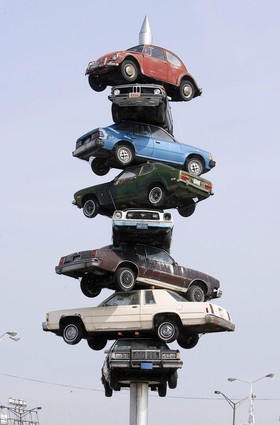 On Friday night, a multi-car pile-up was cleared away from the Cermak Shopping Plaza in Berwyn. No, it wasn't an accident, rather a local landmark was brought to its knees. Sadly, this is probably the single most recognizable icon from Berwyn, Illinois. If you've watched Wayne's World, you'll identify it. It's proper name is, The Spindle.

The Spindle has been located near the intersection of Cermak Road and Harlem Avenue since 1989. Ever since its installation, residents have questioned whether the sculpture was art, trash, or simply a car-ka-bob. Honestly, I always found it funny. According to the Chicago Tribune, the artist Dustin Shuler, did not know his work was coming down until he witnessed the video online.

Since news that a Walgreen's was going to be constructed at this location, many community activists have spearheaded attempts to preserve the site. One such site was Save the Spindle.

Now with the removal of The Spindle, I guess Berwyn's most famous claim to fame is the old Svengoolie line, "Ber-wyn!"

I'd hate to be anywhere near there during a tornado!

Maybe that's how the cars were impaled in the first place?

Awww man, that really stinks. I'm sorry to hear it came down. But I'm sure the new Walgreens will have as much character and creativity.

That is sad. Wayne's World rules. The same thing happened with another piece of car art....much uglier in my old college town. You can find that link here:
http://www.roadsideamerica.com/attract/CTHAMparking.html

Looks like there just aren't many places left for ugly car art in America anymore.....what is this country coming to?

Wow! That was ugly.

No its not.Beauty is in the eye of the beholder or whoever has had the most to drink on a Saturday night.

Good point. I think whoever had the most to drink on a Saturday night might be the first to try and climb something like this.

My very first thought when I hear the name "Berwyn" is, as Bill mentioned at the end, of the Son of Svengoolie. I have no idea why they did it, but they would always play a track of some gentlemen elongating in a slightly sing-song fashion the name of the town. And they would do it every time. For the unenlightened, here is one example:

That's it. That's the old Svengoolie I remember complete with, "Berwyn!" In fact, the funny thing about Berwyn these days is there attempt at redevelopment. Berwyn has a reputation as being an older, uglier suburb compared to its neighbor, Riverside. Berwyn is marketing itself to the aging gay community. Honest. If you happen to look around Boystown, not too far from Wrigley Field, you'll notice large billboards, "Berwyn. The Center of Everything." I'm curious to see how that unfolds over the next 5 to 10 years.