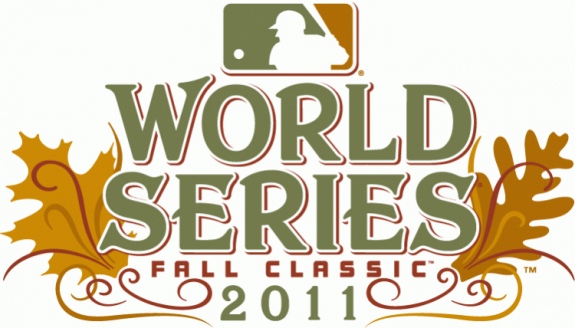 An entire season has boiled down to this. Game 1 of the 2011 World Series is underway at Busch Stadium in St. Louis. The National League Champion St. Louis Cardinals are hosting the American League Champion Texas Rangers. Due to the outcome of this year's All-Star Game, the Cardinals will have home field advantage.

After a full season of blogging about the activities of all 30 Major League Baseball teams, I guess I should announce that I am rooting for the Texas Rangers. I'm disappointed that my team, the Chicago Cubs, failed miserably all season. Susan's team, the Milwaukee Brewers, came so close to reaching the Fall Classic. They simply seemed to fall apart in the National League Championship Series (NLCS). The Rangers fell short in the World Series last year against the San Francisco Giants.

I think the Rangers have the pitching staff and offense to handle the Cardinals, but St. Louis was dead in the water at the end of the regular season. The Brewers ran away with the National League Central title, and the Atlanta Braves had a stronghold on the NL wild card. On the final day of the regular season, the Cardinals won the wild card. They made the playoffs look easy as they knocked off the Philadelphia Phillies in the NLDS, and the Brewers in the NLCS. But, the Rangers destroyed the Detroit Tigers in the ALCS.

So, who's watching the World Series? Sadly, probably not too many people. With two teams from the Central Time Zone, the odds are that the ratings will be down. Down significantly. According to the Associated Press, the 2005 World Series between the Chicago White Sox and Houston Astros was the lowest rated World Series of all-time. I'm certain Fox is not pleased with the matchup.

Still, it's the World Series and I will be watching. Susan's still stinging from the Brewers loss in the NLCS, so she won't be tuning in. I completely understand. She officially became a Brewers fan at the start of the 2007 season, so this is the first time she truly had to deal with postseason disappointment. The 2008 season doesn't really count. Even though the Brewers won the NL wild card that season, she knew they were depleted going into the NLDS against the Phillies.

So what's my prediction? I'm picking the Texas Rangers in six over the Cardinals. Yes, I'm picking Texas to win the franchise's first World Series title.

Susan still has unexpected surprise from Wisconsin to pull for and that is The University of Wisconsin Badgers and Russell Wilson. Brewers for Badgers is not a bad trade off at all.

She's not a big college football fan either.

From what I have heard everybody in Wisconsin is a college football fan this year with Russellmania.